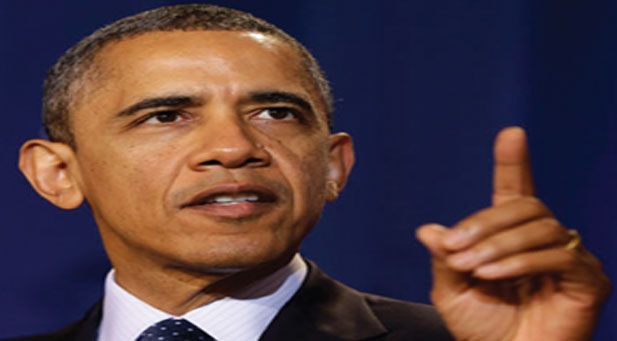 With ‘no more campaigns to run,’ Obama refuses to back down

WASHINGTON, D.C.  (NNPA) – The strongest line in President Barack Obama’s State of the Union Address (SOTU) last week was adlibbed. When he said toward the end of his one-hour speech, “I have no more campaigns to run,” Republicans laughed. He quickly shot back, “I know because I won both of them.”

That brief exchange tells us what we can expect in Obama’s final two years in office and reflects two different realities. A confident and relaxed Obama, making it very clear that he is not going to curl up in a corner and concede the next two years to Republicans, outlined his bold vision for the future, a vision that does not abandon his key policy positions.

Though Obama did indeed win both times his name was on the ballot, Democrats suffered major losses in the 2014 mid-term elections. Consequently, Republicans hold a 247-188 edge in the House. In the Senate, there are 54 Republicans, 44 Democrats and two In-dependents who usually vote with Democrats.

On Tuesday night, President Obama seemed to be setting the stage for 2016 when in addition to the White House; there will be a major battle for control of the Senate, where 25 Republicans will be up for re-election, compared to only 10 Democrats.

Though it will be difficult to get many of the proposals President Obama said will be in his budget when it is delivered to Capitol Hill in two weeks, he argued forcefully that his polices had worked, despite strident Republican opposition over the past six years.

“We are 15 years into this new century,” he began in his address to a joint session of Congress. “Fifteen years that dawned with terror touching our shores; that unfolded with a new generation fighting two long and costly wars; that saw a vicious recession spread across our nation and the world. It has been, and still is, a hard time for many.

“But tonight, we turn the page. Tonight, after a break-through year for America, our economy is growing and creating jobs at the fastest pace since 1999. Our unemployment rate is now lower than it was before the financial crisis. More of our kids are graduating than ever before. More of our people are insured than ever before. And we are as free from the grip of foreign oil as we’ve been in almost 30 years.

“Tonight, for the first time since 9/11, our combat mission in Afghanistan is over. Six years ago, nearly 180,000 American troops served in Iraq and Afghanistan. Today, fewer than 15,000 remain. And we salute the courage and sacrifice of every man and woman in this 9/11 Generation who has served to keep us safe. We are humbled and grateful for your service.

“America, for all that we have endured; for all the grit and hard work required coming back; for all the tasks that lie a-head, knowing this: The shadow of crisis has passed, and the State of the Union is strong.”

As has become customary during SOTU speeches, Democrats stood and applauded when Obama made a point that appealed to them while dour-faced Republicans remained seated. Unlike 2009 when Rep. Joe Wilson, a Republican from South Carolina, violated congressional decorum by shouting, “You lie,” Republicans were mostly polite, while making it clear they were not endorsing Obama’s vision for his final two years in Office.

Noticeably absent from the SOTU were three of the most conservative members of the Supreme Court: Chief Justice John Roberts and Associate Justices Clarence Thomas and Antonin Scalia. Thomas has called the event so partisan that it makes him feel uncomfortable. Scalia has dismissed it as a “childish spectacle” and Roberts has likened it to “a political pep rally.” In modern years, regardless of a court member’s personal views, the robed justices have attended the yearly event, most of the time displaying no emotions.

Reviewing his accomplishments over the past six years, Obama boasted, “We believed we could reverse the tide of outsourcing and draw new jobs to our shores. And over the past five years, our businesses have created more than 11 million new jobs.

“We believed we could reduce our dependence on foreign oil and protect our planet. And today, America is number one in oil and gas. America is number one in wind power. Every three weeks, we bring online as much solar power as we did in all of 2008. And thanks to lower gas prices and higher fuel standards, the typical family this year should save about $750 at the pump.”

With Democrats applauding, Obama continued, “We believed we could prepare our kids for a more competitive world. And to-day, our younger students have earned the highest math and reading scores on record. Our high school graduation rate has hit an all-time high. More Americans finish college than ever before.

“We believed that sensible regulations could prevent another crisis, shield families from ruin, and encourage fair competition. Today, we have new tools to stop taxpayer-funded bailouts, and a new consumer watchdog to protect us from predatory lending and abusive credit card practices. And in the past year alone, a-bout 10 million uninsured Americans finally gained the security of health coverage.”

Like most politicians, Obama cherry-picked some numbers, according to FactCheck.org, a nonpartisan project of the Annenberg Policy Center at the University of Pennsylvania that describes itself as a nonpartisan, nonprofit “consumer advocate” for voters that aims to reduce the level of deception and confusion in U.S. politics.

For example, it noted, “It’s true that nearly 8.2 million private sector jobs have been added since February 2010, which was the low point of the great job slump that began a year before Obama took office and continued through his first year. But total employment has risen less – by 7.6 million – held back by layoffs of state and local government workers. Obama was technically correct, as he was careful to speak of jobs “’our businesses have created.’”

“The 9 million figure includes 3 million Americans who have chosen insurance plans on the federal or state marketplaces and 6.3 million who were determined eligible for Medicaid and the Children’s Health Insurance Program. An estimated 3.1 million young adults under age 26 also joined their parents’ plans as a result of the Affordable Care Act’s requirements.”

There is a growing consensus that the economy has largely recovered under Obama’s stewardship – with little help from Republicans.

“At every step, we were told our goals were misguided or too ambitious; that we would crush jobs and explode deficits. Instead, we’ve seen the fastest economic growth in over a decade, our deficits cut by two-thirds, a stock market that has doubled, and health care inflation at its lowest rate in 50 years. This is good news, people,” he said to laughter and applause.

“So the verdict is clear. Middle-class economics works. Expanding opportunity works. And these policies will continue to work as long as politics don’t get in the way. We can’t slow down businesses or put our economy at risk with government shutdowns or fiscal showdowns. We can’t put the security of families at risk by taking away their health insurance, or unraveling the new rules on Wall Street, or refighting past battles on immigration when we’ve got to fix a broken system. And if a bill comes to my desk that tries to do any of these things, I will veto it. It will have earned my veto.”

Exercising the veto is one of the few tools Obama has except for issuing executive order in a Republican-controlled Congress. Until recently he has been reluctant to sign executive orders or veto bills that crossed his desk.

There was a similar pattern with executive orders.

Despite Republican charges that Obama is a “socialist dictator” and operates an “imperial presidency,” he has issued the fewest executive orders since Grover Cleveland, who was in the White House from 1885 to 1889.

But Obama promised to be more combative his last two years, if necessary.

He outlined a broad agenda that, among other things, offers two years of free community college, shifts $320 billion in new taxes on the wealthy largely to the middle class, vetoes any legislation that would undermine his executive order on immigration or sanction Iran over its nuclear program while negotiations are underway, and mocks Republicans denials of climate change.

On the latter, he said, “2014 was the planet’s warmest year on record. Now, one year doesn’t make a trend, but this does: 14 of the 15 warmest years on record have all fallen in the first 15 years of this century. I’ve heard some folks try to dodge the evidence by saying they’re not scientists; that we don’t have enough information to act. Well, I’m not a scientist, either. But you know what, I know a lot of really good scientists at NASA [National Aeronautics and Space Administration], and at NOAA [National Oceanic and Atmospheric Administration] , and at our major universities. And the best scientists in the world are all telling us that our activities are changing the climate, and if we don’t act forcefully, we’ll continue to see rising oceans, longer, hotter heat waves, dangerous droughts and floods, and massive disruptions that can trigger greater migration and conflict and hunger around the globe. The Pentagon says that climate change poses immediate risks to our national security. We should act like it.”

Before Obama delivered his State of the Union speech, new Senate Majority Leader Mitch McConnell (R-Ky.) made it clear that it didn’t matter what goals Obama articulates.

At a news conference before the speech, McConnell, who once said his goal was to make Obama a one-term president, said, “With all due respect to him, he doesn’t set the agenda in the Senate”

In his speech, Obama said he realizes Democrats and Republicans have different ideas on major issues, but urged cooperation where possible.

Are we the worst generation?

Are we the worst generation?
[…]

“Throughout his life, Dr. Cooper was committed to promoting excellence, innovation and sustainability across our nation’s HBCUs,” […]

Blacks in newsroom at all-time low

Blacks in newsroom at all-time low
[…]