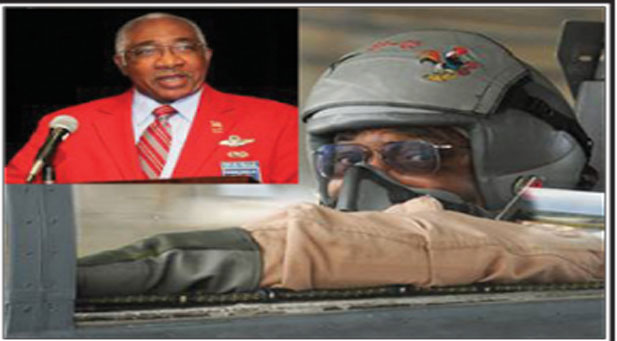 Tuskegee Airman protégé, fighter pilot, war hero, author, and motivational speaker all describe Colonel Richard “Dick” Toliver, but he most prides himself as a loyal son, faithful husband, and proud father who put his faith and family above all that he cherishes and achieved in life.

Richard Toliver certainly knows how to conjugate a verb and has matriculated from one of the country’s most storied African American institutions of higher learning, having graduated from Tuskegee University. However, that alone is not what makes Toliver an exceptional individual nor does it begin to tell the story of a truly fascinating human being and great American hero.

Upon closer examination of the life of Colonel Richard “Dick” Toliver it becomes clear that he clearly understood the words of Dr. King on what true greatness entails, imbued by a list of accomplishments which far exceed his humble beginnings as a child growing up in the Jim Crow South in Louisiana during the late 1930’s and early 1940’s.

Colonel Toliver was inspired by both his mother and grandmother growing up, crediting both with planting and nurturing a seed deep inside him as a young boy, which he credited for shaping his development into the man that he’s become to this day.

Tuskegee Airman protégé, fighter pilot, war hero, author, motivational speaker all describe Colonel Richard “Dick” Toliver, but he most prides himself as a loyal son, faithful husband, and proud father, when asked what he considered among his greatest achievements in life.

Colonel Toliver is a 26-year veteran of The United States Air Force who was trained under the leadership of the Tuskegee Airmen. As a combat pilot he successfully flew 446 missions in Southeast Asia and was responsible for testing and the evaluating major weapon systems for the Department of Defense and allied military programs. After retiring from the Air Force, Colonel Toliver entered into the entrepreneurial arena as well as political endeavors in New Mexico, Alabama, Georgia, and Texas. He is credited for his public service, having spent time on the New Mexico Public Safety Advisory Commission, Board of Regents, University of New Mexico, and Board of Directors of the Kirkland Partnership Committee.

Colonel Toliver was recruited by former United States presidential candidate Ross Perot’s United We Stand America Campaign as a national advocate for education, economic and government reform. He later served as the National Spokesperson and Coordinator for Minority Community Outreach for the Reform Party during Perot’s 1996 campaign.

In 1998 Perot hired Colonel Toliver to help re-energize the Southern Christian Leadership Conference (SCLC) as the civil rights organization began strategizing for the 21st century. For over six months, Toliver collaborated with SCLC President, Martin Luther King, III, the late Coretta Scott King, and former U. N. Ambassador Andrew Young among others to draft a plan of action for the SCLC.

Colonel Toliver recently came to Fort Lauderdale to attend several events during a week of activities for the Dr. Martin Luther King, Jr. Holiday celebrations, including a book signing at the Old Dillard Museum  on Jan. 16, by Toliver author of Woman A Godly Creation, and An Uncaged Eagle. He also addressed the Fifth Annual MLK Teen Summit held on Saturday Jan. 18, at the African American Research Library & Cultural Center (AARLCC). He recently agreed to share his thoughts with the readership of the Westside Gazette Newspaper before addressing The MLK Teen Summit.

Westside Gazette: Who has been the most influential person in your life?

Col. Toliver: “The person who influenced me the most early in my life was none other than my late mother, Daisy Anderson Toliver. She was a woman who was left with six children, completely alone to raise a family. She was 36-years-old. The youngest was four the oldest was 16. I was smack in the middle. And the fortitude, the determination, the faith of that woman is what I got a hold of early in my life. I was influenced by her suffering, by her tears and her sweat to try everything that she could to help us go forward. So the determination and perseverance, the unyielding struggle of my mother is the thing that inspired me more than anything.”

W.G.: What role has education played in your personal growth and development?

Col. Toliver: “Education was extremely important. That was the door, which was the key for my generation. Back in the 40s and the 50s even parents that hadn’t gone to school knew that education was the door through which things could be made better. Even in the midst of the racial oppression and all the barriers that were there, we all believed and we were taught that education would enable you to rise above it and fight through it because it was the notion that if I have it in my head, then no one could take it away and that I could use that to effect the change in my life and then change in my community. And the teachers in those days were committed to it. They were going to do everything possible to encourage you to learn and if they couldn’t encourage you, they sent you to the principal’s office and he would encourage you. That was a lot of physical encouragement when mental and spiritual encouragement failed. In a few words education was absolutely the key to prosperity, to achieving the things that you wanted.”

W.G.: When did you decide you wanted to become a pilot?

Col. Toliver: ”That’s an easy question for me because we had escaped the South, to California during World War II. My father Booker Taliaferro Toliver was named after Booker T. Washington. He was chased out of the south by the Ku Klux Klan. He stood up for his rights during those days. And we soon forgot the horrendous oppression of the South. Where we lived in Oxnard, California was right adjacent to the air fields. And the young men would come through from the air base, in their jeeps in their flight suits and their leather helmets and we got to know some of those guys. And the playground was right under the flight paths of the air fields.  And they would sometimes wave their hand out as they flew above us or waggle their wings. It was just an incredible sensation knowing there’s this guy who lives down the street and I’m seeing him in this plane flying. I got fascinated by it. And I decided at seven years old that, that’s what I wanted to do that. When we moved back to the South I would read books about airplanes and just imagined myself being in an airplane flying. Later on my older brother went on to Tuskegee Institute. One day he came home in his ROTC uniform and that’s all I needed to see.”

W.G.:  What do you consider your greatest personal achievement in life?

W.G.: What advice would you give young people regarding the keys to success in life?

Col. Toliver: ”I’d give them what my mother gave me. She said, “Son whatever you decide to do, aim for the sun, aim as high as you can. And if you miss the sun, you’ll hit the moon. And if you miss that moon, you’ve got all those stars of which to reach your dreams. Hitch your dreams to one of those stars and keep your mind on them. Don’t let that dream get away from you. And have faith in God, Son and you can make it. Aim high. Stay focused. And have faith in God.”