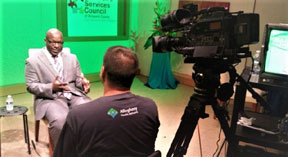 I met Mikelange Olbel two days after Christmas in his office on Sistrunk Boulevard. As a Broward native, it is always fascinating to see Sistrunk’s transformation. New light posts. Construction. Jimmy John’s. Evidence of the creeping reality of downtown Fort Lauderdale’s extension. However, the exceptionality of Sistrunk’s community revitalization remains embedded in its committed residents, community leaders, and businesses that are devoted to keeping the interests and concerns of the Black community injected into the neighborhood’s renewal. I would be pleased to discover Mr. Olbel a member of this admirable group.

Despite the relaxed mood of the holiday season, I found Mr. Olbel diligently working during a short transition between meetings. Founder & CEO of Team Saving Our Youth, a family and youth empowerment organization, he has proven to be a tireless community educator highly devoted to his work. This was evident by an office decorated with personal triumphs and awards from some of South Florida’s most prestigious organizations.

Heartfelt gifts and family pictures were set on enthusiastic display and his inbox and out-box were in an organized over-flow. He motions to a bag of toys stored neatly in the corner. “Leftovers from the Christmas toy drive.” he tells me.

Immediately I was struck by his joy. It was a joy nestled in deep satisfaction and happiness at the discovery of a life’s purpose. Throughout our conversation it became increasingly obvious Olbel was fully operating in this purpose. His passion for youth and family empowerment was infectious and palpable. “My life has adequately prepared me for this work,” he expressed to me. “I love what I do because it has made a difference in hundreds of lives.”

Hailing from Pompano Beach, Olbel personally under-stands the struggles of living in poverty. Despite his parents moving to South Florida from Haiti in search of better opportunities, they, like many Haitian immigrants, were met with racial and xenophobic barriers that seem to characterize the Haitian experience here. This resulted in a lifelong economic struggle equipped with a circulating carousel of low-paying jobs, multiple stints of homelessness, and the unfortunate exposure of the Olbel children to the lure of the streets.  Despite economic instability, Olbel’s parents were a God-fearing and loving couple, assisting family members when they could, sharing their home and meals with those in need. Above else, his parents emphasized personal responsibility and the necessity of an education.

Unfortunately, by the age of 13, Olbel had fallen prey to severe disinterest in school, enticed by the seemingly fun days of truancy and allowing his grades to plummet. Then came a life-changing statement from his father.

“He told me, if I don’t stop playing around and change my ways that I would end up in prison,” Olbel recounts, “At first, I was shocked my father would say that to me. It shook me. But those words changed my life and redirected the path I was on.”

Those words would be proven prophetic. Throughout his teenage years Olbel would witness all four of his older brothers fall into the clutches of the prison system at early ages, spending multiple years behind bars. Although he recognizes an element of personal responsibility in each of their stories, he is also quick to point out the roles economic hardship and systematic racism played in their incarceration.

“The system isn’t always fair,” he tells me, “In America, Black and Brown boys are considered criminals from the womb. They aren’t even given the chance to reach their full potential and with the lack of adequate role models and opportunities, they sometimes make poor choices and get caught up.”

Olbel was determined not to relive the stories of drugs and violence that seem to characterize “that side” of Pompano Beach. He became the first in his family to graduate college, leaving with a dual degree in Criminal Justice and Sociology with a minor in Psychology from the University of Dubuque in Dubuque, Iowa. He would later go on to receive a Masters of Science degree in Public Policy & Business Management from Iowa State University. This was strategic and purposeful. At an age when most college graduates are feeling out life’s possibilities, Olbel was already certain of his desire to help change policies deteramental to young lives. Upon his return to South Florida, he worked as a youth educator, but, being unable to shake the desire to affect lives on a broader scale, boldly walked away from this stable position to explore the uncertainty of entrepreneurship. This was the birth of Team Saving Our Youth.

Launched in 2012, Team SOY has made excellent strides towards its mission to empower youth and families in Broward county. Inspired by the stories of his brothers and other peers who found themselves in the justice system at a young age, Olbel envisioned an organization that would foster positive decision-making, leadership skills, self-respect, and confidence in youth ages 5-22, steering them away from juvenile delinquency.

The organization’s aim is to help develop in youth the mindset necessary to take ownership of their futures. Over 600 youth have successfully completed individualized programs with Team SOY, which has resulted in the transformation of their families and communities. The change is remarkable.

Under Olbel’s leadership, Team SOY has developed partnerships with the Children’s Services Council, United Way, and Florida Department of Juvenile Justice, establishing itself as an emerging leader in Broward County’s youth development sphere. Olbel’s organization prides itself on its comprehensive approach to juvenile delinquency, creating a customized program for each child based on their needs and goals. With the incorporation of the family and community into its early intervention services, Team SOY also seeks to develop the support system necessary for continued success and growth of youth who have graduated from the program.

Olbel continued to emphasize the importance of community and the responsibility we all have to create an environment for our youth and families to thrive. He reflected this philosophy in the community activities and events in which Team SOY engages. To this date, Olbel’s organization has poured nearly $1 million into the community through local clothing and food drives, Christmas toy drives, an annual back to school give-a-way, and donations, such a $30,000 donation to earthquake victims in Haiti.

“That’s our responsibility, those of us that were blessed to make it out,” he argued, “We’re suppose to return, listen, and help build. Communities should have a say in identifying their needs and wants and we should stand in the gap and link their requests with resources.”

I thought again to Sistrunk and its residents. Are their voices truly encouraged in the “revitalization” of their neighborhood? If not, the county, city, and developers are missing out on vital input that would ensure lasting change and sustainability. Olbel agrees.

“That is why it is important to be accessible and approachable.” He stated. That did not seem to be something he struggled with. Olbel was personable and charismatic, some of the best characteristics of a leader. It was clear he loved people and put their needs before his own agenda. I listened as he recounted his experiences going door-to-door in the area, conversing with residents, and introducing his programs and services — an unorthodox approach, but expected. Olbel represents a new wave of young leadership, those with unconventional tactics, aggressive goals, and new ideas. He considers himself progressive in thought, bold in action, and positive in speech. This is the legacy of his father.

When speaking of his father, Olbel’s reverence for him is obvious. According to him, his father never let a teaching moment pass by, constantly encouraging and instilling wisdom into his sons. Unfortunately, he would lose his father to kidney failure in July 2014. It was a devastating loss. What would get him through this difficult time were his father’s words and the dream he planted into his each of his sons to pursue success despite obstacles.

“He would tell us to always put ourselves in the position to dictate our own futures and to use barriers as foot stools for our next step up.” Olbel said. This is the wisdom he shares with Broward’s youth.

Olbel attributes his accomplishments to his very present parents and the support of his family. He has set high expectations and his younger relatives look to him for guidance and leadership. In November 2014 he began his own family, marrying Kristen Olbel, a law enforcement officer, and becoming a father nearly a year later to Mikelange Olbel, II, now only 6 months old. Olbel gushes over being a father. All new parents know this feeling.

As a husband and father, Olbel is even more invested in the future of Broward County, wanting to see his community thrive for the sake of all young lives such as his son’s. After our insightful conversation, I asked him what would be the takeaway he wanted youth to remember after completing his program. He answered without hesitation.

“Success is a choice. Only you are responsible for overcoming obstacles and working hard for it,” he responded, “Our kids have to know failure is not an option.” With the current state of the bodies, souls, and minds of our Black and Brown children living in America, I could not agree more.

Has our system failed our youth?

Has our system failed our youth?
[…]