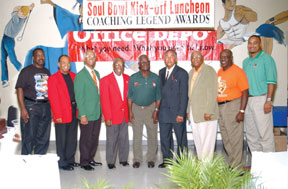 A time to be born

A Time to Work

Samuel worked in the school system for over 40 years, from 1951 to 1953, he taught Horticulture at Veterans in Delray Beach, Fla. He was a science instructor at Blanche Ely High School from 1953 to 1970. He also taught Earth Science at Northeast High School for one year (1971-1972). Before retiring in June 1992, he was an Assistant Administrator at Plantation High School for 20 years.

Samuel worked just as hard and long as in his community as he did in his career. He was a lifelong member of Bethel AME Church of Pompano Beach Fla., where he served over 28 years as the Chair-Pro-Term of the Trustee Board; Church School teacher, Feeding Ministry. In addition to being a part of various boards and associations, he was also a founder and life charter member of the Fort Lauderdale Alumni Chapter of Kappa Alpha Psi fraternity, Inc.

A Time to Rejoice

In 2008, he received the Westside Gazette’s Coaching Legends Hero in Our Com-munity Award. On June 13, 2009, the City of Pompano dedicated the Houston/Sworn Aqua-tic Center in his honor.

A Time of Loss

Samuel departed this journey on Oct. 5, 2015. His last resting days were spent at the Willow Wood facility in their Memory Care Unit, where he was treated with respect and the highest quality of care.

A Time to Mourn