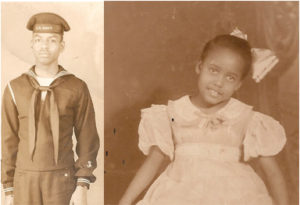 Both born during the peak of the great land boom in South Florida, the friendship and camaraderie of “Beau” and “Honey Bunch” have spanned for decades. This friendship has given the two of them countless cherished memories.

Beau tenderly recalled memories of his beloved Adele Lovett. Although they were not biological siblings, their relationship was that of two closely bonded brother and sister.

Growing up in the city of Fort Lauderdale, they both attended the only school for African Americans, The Old Colored School, later named Dillard. Clarence Walker was their principal.

Their classes were in the building that is now “The Old Dillard Museum”. Honey Bunch left to attend Industrial High School in West Palm Beach where she graduated and “Beau” left to join the United States Navy. However, three years later, he returned and graduated from Dillard High in the Class of 1944.

While living and working in Washington, D.C., Honey Bunch married Julius Wright. The young family moved to Fort Lauderdale in 1955 with their two young children Julian and Roslyn. Their family grew with the birth of David, Norman, and William (Billy). In 1953, Beau returned to Fort Lauderdale. Beau’s family grew with the birth of Bryan Keith and Belinda (Kelly). Frequent get-togethers cemented the continuation of another generation of lifelong