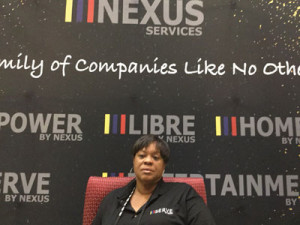 Orlando — T-Ann Johnson saved a client’s life. That’s when she knew the job was more than just a job.

It was a calling.

Saving lives was not in the job description. But, as Director of Empower and Serve by Nexus, it came naturally as one would drink water when thirsty, an intricate part of the established work culture.

The former co-founder of On The Wings of Angels Ministry, which helped women offenders reenter society, Johnson functions as much as a social worker as an administrator, and, often as a blessed angel.

“We give people hope where there is none,” she said when asked to explain her job.  That simple sentence defines the nature—and reward—of what she does.

Johnson is one of more than 200 employees in 20 cities that work under the umbrella of Libre by Nexus, the controversial but wildly successful bonding company that has revolutionized the trade by using ankle bracelet GPS tracking devices to keep up with clients. The company – which has bonded out more than 20,000 people, many of them undocumented immigrants – charges $120 a week, which critics have deemed too much.

While their use of innovative technology has received wide attention, Libre by Nexus’s employees insist their more important contribution to the bail bond business is their human touch. Through hiring practices focused on developing a diverse and caring workforce and pro-grams aimed at helping clients once they are back on the streets, Libre by Nexus claims it is not just interested in getting clients out but helping them move on and up.

Johnson cited the case of a client named “Michael” that she met over the phone and grew to be close enough that she calls him friend. He had a $1,000 bond for an offense Johnson could not identify.

In minutes, she contacted a bails bondsman to get him released.

“Now, that’s not how we ordinarily work. But there was something in my heart about Michael,” she said. “I just decided we’d do all the paperwork on the back end.”

Johnson said she appreciates that empathy is part of her job description. Sometime later, Michael’s father died; his emotional state led him to commit another crime, Johnson said. “He called me and said, ‘T-Ann, I’m in trouble.’ “

Johnson said she went with the client to turn himself in. And when he appeared in court, she testified as a character witness. She explained to the judge that Michael would be in the Nexus program, which helps offenders regroup and reenter society through counseling and services, which would be better for him than prison.

“The judge agreed,” she said, “that working with me, with us [was a solid option]. Instead of getting up to 20 years in prison, he served 90 days. And now he’s made extraordinary leaps in his life.”

Stories similar to Johnson’s are plentiful at Libre by Nexus. “We build relationships with clients,” Johnson said.

Co-founder Michael Donovan has intentionally created this culture. First, his national staff is very diverse, an all-American mix of whites, like him as well as African-Americans, like

At their 2017 company retreat in Orlando resembled a United Nations session. Many staffers are immigrants or the children of immigrants, so they, too, have an up-close-and-personal perspective on the challenges that come with being detained. His staff also include ex-offenders, the idea being they will have the deep empathy required to extend themselves to help clients, having been incarcerated.

“If they have been to jail, they are more likely to get an interview than not,” said Donovan, who founded the company after spending seven months in jail for writing bad checks. He could not afford bail and was freed only when, in a deal, he pleaded guilty to several felony counts after seven months.

“We are all governed by systems,” Donovan said at the retreat. “But we are in a system built by people who think far differently from us. It’s a system based on racism, segregation and genocide… . We’re here to change the system.”

Libre by Nexus has vaulted to the top of criminal bonding business in part because of its innovative GPS tracking system for clients. Detractors have complained about the cost of the ankle bracelets ($120) and their size. But Donovan co-founder Richard Moore announced the company was using new, lighter ankle bracelet and wrist GPS devices that resemble a FitBit.

All that aside, what makes the company work are the people who work there.

“I never heard of the U.S. as a place of incarceration, but I was detained as soon as I set foot here at the airport in Newark (N.J.),” said Fernando Manu, from the Congo in Africa, a former United Nations worker. “After three months, Libre bailed me out, ending my torture.”

Soon after, Manu was hired by Libre by Nexus as a new client case worker. “The best thing that could happen to me,” he said, “because I care about the people who call us. People need people who treat them like humans and who understand what it’s like to be in jail. I’m able to give them the hope they need to keep going. I spend as much time on the phone with them as possible, to offer them comfort.

“I go home after work with peace in my mind because I know what if feels like to be helped when you had no hope.”