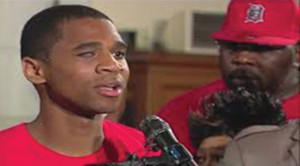 After serving nine years in prison for a quadruple murder he didn’t commit, Davontae Sanford is finally free

The lawyers of wrongfully convicted Davontae Sanford said it was clear from the beginning that he was innocent and his confession was false.

Megan Crane, Sanford’s lawyer, said that “police practices that are widely inappropriate for vulnerable juvenile suspects and a criminal justice system that systemically failed him at every step of his process” are largely responsible for her client’s nine-year imprisonment.

Sanford was wrongfully imprisoned since age 14 for a quadruple homicide that occurred in 2007 on Detroit’s Runyon Street.

According to Sanford’s legal team, Sanford, who is blind in one eye, was approached by homicide investigators as they canvassed the neighborhood about midnight, just a few hours after the shooting in September 2007. They said law enforcement officials convinced Sanford to go to the station to tell them about information he may have had about the crime. The officers received permission from his grandmother to take him to police headquarters for questioning.

Just 14 years old, Sanford was picked up by police in his pajamas, was questioned for nearly 24 hours over the course of two days without a parent or lawyer present, according to his lawyers. On the second consecutive day of questioning, Sanford confessed on video to being involved in the homicide.

He subsequently entered a guilty plea in the middle of trial, once he realized his defense attorney was not going to do anything to defend him, said David Moran, Sanford’s lawyer and director of Michigan Innocence Clinic.

Crane said that after “bullying and coercion” during the police interrogation, Sanford “just made something up” in order to go home.

According to Crane, police falsified evidence linking Sanford to the crime, and suggested that admitting involvement in the crime meant that he could go home.

Sanford’s confession was “a toxic combination of the interrogation tactics that police use across the country combined with vulnerabilities that are inherent to all kids and teenagers,” said Crane, adding that many adults are also vulnerable to the tactics that are “developed for seasoned adult criminals.”

Crane continued: “It was clear from the beginning that his confession made little to know sense. It got far more wrong than it did have right.”

Just 16 days after Sanford was convicted, professional hitman Vincent Smothers began insisting that he was responsible for the murders in addition to eight others.

Moran, the director of the Michigan Innocence Clinic at the University of Michigan Law School, said that every detail provided to police about the case by Sanford was wrong. According to Moran, Sanford misidentified the number of accomplices when matched against eye-witness testimony, misidentified the types of guns used and the location of his alleged weapon and identified a Coney Island restaurant closed for renovations as the place he planned the crime.

“Smothers on the other hand, told them all sorts of things they didn’t know that turned out to be true,” said Moran.

Smothers was able to provide police with new details about the crime that they later confirmed through further investigation such as the location of a gun used in the crime, suggesting that Smothers’ confession was more likely to be true.

In April 2015, the Michigan Innocence Clinic and North-western’s Center on Wrongful Convictions of Youth, headed by Moran and Crane respectively, filed a Motion for Relief from Judgment high-lighting the detailed, corroborated confession by professional hitman Smothers to the Runyon Street murders and the obvious unreliability of Sanford’s confessions, given their complete lack of corroboration and many inaccuracies. As a result, the Michigan State Police reinvestigated the murders. On May 20, 2016, the Michigan State Police provided the report to the Wayne County Prosecutor’s office.

On June 7, Wayne County Judge Brian Sullivan ordered the immediate release of the now 23-year-old after he served nearly nine years of a 37-to-90-year sentence.

“This is as clear a case of miscarriage of justice as we can ever hope to see,” said Moran. “It was clear that this was a wrongful conviction based on false confession.”

NNPA Publishers Address Equity in Education in their Newspapers

NNPA Publishers Address Equity in Education in their Newspapers

Do children all need to succeed the same way?