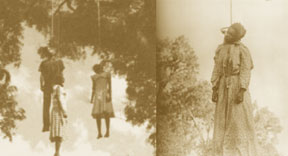 Spiritually-conscious women and men of African descent gather at 3 p.m. sharp on Sunday, March 29 at Congo (Washington) Square, Seventh & Walnut Streets in Philadelphia for the Second Annual Sacred Libation Ceremony in remembrance of the 150 documented Black women who were lynched between 1870 and 1957.

In March 2014, the First Annual Sacred Libation Ceremony to honor the women was conducted by Iya Marilyn Kai Jewett and a group of priests of Philadelphia’s African American Yoruba/Orisha community.  Although it rained that day, approximately 30 people came to witness the ritual — some from as far as New York and Washington DC.  The ceremony has now been instituted as an annual ritual on the last Sunday in March as part of Women’s History Month.

How did this all come about? Last year, while perusing stories on Dr. Boyce Watkins’ “Your Black World” news website, Jewett came across a story entitled, Black Women Were Lynched Too! written by blogger Yolanda Spivey.

“A lot of people come here from other states, and they’re sleeping in their car, and they have to figure out how to make ends meet to survive,” said “E-3,” a veteran and former homeless individual. “Rents are just too high. Unless you’re getting some type of government assistance, you are basically left to struggle, you are basically on your own.” […]

Lorenzo White had a huge footprint on Spartans football