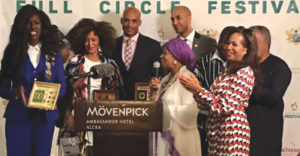 “I hear time and time again from Black Americans who traveled to Africa about how connected they felt and how different they found whatever country they traveled to from the images of Africa they grew up with,” said Roman Debotch, owner/contributor of the site Black Excellence.

“A people without the knowledge of their past history, origin and culture is like a tree without roots.” —Marcus Garvey

“For Africa to me… is more than a glamorous fact. It is a historical truth. No man can know where he is going unless he knows exactly where he has been and exactly how he arrived at his present place.”—

Maya Angelou The Transatlantic Slave Trade started with slave ships, whips, chains and a most demonic kind of evil: Europeans and others hunting down Africans like animals.

The result: an estimated 12 million enslaved Africans were shipped as cargo across the Atlantic Ocean to the Americas between the 16th and 19th centuries – and, according to the Encyclopedia Britannica, that figure represented just one stage of the slave trade.

By the 1480s, Portuguese ships were already transporting Africans for use as slaves on sugar plantations in the Cape Verde and Madeira islands in the eastern Atlantic.

Spanish conquistadors took African slaves to the Caribbean after 1502, but Portuguese merchants continued to dominate the transatlantic slave trade for another century and a half, operating from their bases in the Congo-Angola area along the west coast of Africa.

The Dutch became the primary slave traders during the 1600s. In the century that followed, British and French merchants controlled about half of the transatlantic slave trade, taking a large percentage of their human cargo from the region of West Africa between the Senegal and Niger rivers, according to Britannica.

Probably no more than a few hundred thousand Africans were taken to the Americas before 1600.

The largest numbers of slaves were taken to the Americas during the 18th century, when, according to historians’ estimates, nearly three-fifths of the total volume of the transatlantic slave trade took place.

Today, as the world takes note of the anniversary of the slave trade [500 years for some, 400 for others], a rousing call to Africans throughout the diaspora has gone out. “Everyone agrees that all that is needed for Africa to take her rightful place on the world stage is for her children to come back home,” said Her Excellence Dr. Arikana Chihombori-Quao, the African Union Ambassador to the United States of America.

This month, celebrities, including Boris Kodjoe, Idris Elba and Naomi Campbell, traveled to Ghana to visit The Akwamuhene Odeneho Kwafo Akoto III at the Bogyawe Palace, Akwamufie, where he has conferred a citation for “leading our kinsmen home.”

“My special thanks go to Boris Kodjoe and his colleagues for coordinating this all-important trip which I believe is by divine design,” The Akwamuhene said.

“Today forms part of the new awakening. The beginning of our joint resolve to create a continent that we can all feel pride in calling our ancestral home. In many ways, we are grateful for the opportunity to heal and grow together as people united by both blood and purpose.”

Ghana’s President H.E. Nana Akufo-Addo, has reportedly planned a number of events for 2019 in commemoration of the anniversary of the transatlantic slave trade. The commemoration began with the “Full Circle Festival” which brought numerous celebrities and others who visited historical sites and attended a breakfast hosted by the president.

The festival was established to honor African ancestry by celebrating the continent’s heritage and generational legacy. The “Coming Home” theme is expected to continue throughout the year.

“This celebration of ‘Coming Home’ is one that should be encouraged and promoted across the global black community,” said Roman Debotch, owner and contributor of the website, Black Excellence, a platform used to shed light on noteworthy achievements in the Black community.

“I hear time and time again from black Americans who traveled to Africa about how connected they felt and how different they found whatever country they traveled to from the images of Africa they grew up with,” Debotch said.

The transatlantic slave trade still has an effect on the black community in America and ‘Coming Home’ should show and teach black Americans that their history doesn’t begin as slaves, she said.

“There is a rich and vibrant culture and history that took place centuries before and after the transatlantic slave trade. Although they might feel cut off from it, it is at least a good move to visit these countries and know what exists there,” Debotch said.

Jeanette Brown, founder of Excellence & Presence Communications, said going back to Africa means an invitation to return to where her ancestors are from. “It cancels out all the negative images I grew up seeing on TV and the stereotypes that African Americans are not welcomed in Africa, as we are ‘not the same,’” Brown said.

Further, “returning to Africa should mean that there’s a resurgence in wanting to know history and it’s a movement that will bring everyone of African ancestry together as opposed to further separating them,” she said.

“Yes, the transatlantic slave trade effects still reach down today. The effects become more apparent the more we learn and uncover,” Brown said. “The more we are educated on our history we will be able to unpack our similarities and differences. We should also be careful of who is sharing our history with us.”

“In 2019, we are still learning about our origins. Crimes are still being labeled ‘the worst in history…’ and none of those statements end with ‘transatlantic slave trade.’ The invite home is a way for me to support my brothers and sisters.

“If we understand where we come from, we will know where we can go.”

Moses, who describes herself as African Caribbean American, lives in Brooklyn, N.Y., and said she now feels a greater urgency to visit Africa. “I’ve traveled to over 40 countries, heavily concentrated in Europe and Latin America. It’s now time for me to come home,” Moses said.

“Programs to entice people of African Heritage are super critical to help bridge the gap within the diaspora, whether we are African American, Afro Latino, Afro Australian — the power and beauty of us as Black people holds special power that can be leveraged by the continent,” she said.

“I don’t know what I will feel when I go home, but I can’t wait to do so. I’m hoping to go to Ethiopia in 2019. While my roots are more in the West African region – I’m 34 percent Nigerian, I eagerly await the joy of touching down on my ancestors’ soil.”

June 19, 2016 marks World Sickle Cell Day. In a desire to help create a greater awareness of sickle cell disease (SCD) and increase their efforts to find a cure, Pfizer invited members of the Black Press to meet and discuss with key members of their rare disease medical and management staff the state of (SCD) and their search for a cure […]