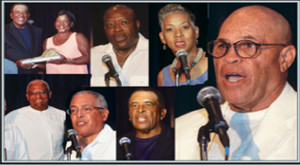 The American Tennis Association (ATA) Black Tennis Hall of Fame Induction Ceremony was a star studded event, featuring individuals which have made major contributions to the sport of tennis. This year marked the 98th anniversary of the ATA, which is the oldest Black sports organization in the United States.    Photos by David Muir

An estimated 2,500 avid tennis players along with their family and friends converged from across the country to Greater Fort Lauderdale to compete in the Annual American Tennis Association (ATA) Championships, from Aug. 2-9, 2015. This year’s ATA Tournament marks the 98th Anniversary of the oldest Black sports organizations in the United States. The highlight of this year’s ATA’s tournaments was the Black Tennis Hall of Fame Induction Ceremony, which took place on Aug. 6, at the Greater Fort Lauderdale Convention Center.

ATA President, Dr. Franklin Scott, thanked the City of Fort Lauderdale for being supportive of the ATA over the years by hosting several of the most recent ATA National Championship events.

“Tonight’s event is really highlighted by the Black Tennis Hall of Fame and the members who we feel are so deserving to the tennis community and tennis family folk for a number of years. Their contributions have been just tremendous and overwhelming. Tonight also helps us to make sure that we are preserving our history for all those who have been a part of this organization, namely our championships and the 98th year of the organization itself. We’re just so proud to be here in the City of Fort Lauderdale. We appreciate the response and the sponsorship that they’ve given to us over the years. By far this has been one of the greatest events that we have and is celebrated by so many of the members.”

Carlos Molinet, Sr. VP of GFLCVB, expressed how significant this year’s ATA would impact Greater Fort Lauderdale. “It’s a dual fold impact; obviously it would be a tremendous economic impact but more importantly it would really continue to solidify the fact that Broward County is one of the most diverse counties in the United States, but the fact that its cultural and its business and its people are so important and thanks to Al Tucker our VP of Multi-Cultural Sales & Development. He’s been able to really leverage these associations and companies.”

“A great example of this as well is we just for the first time ever in Greater Fort Lauderdale hosted the National Urban League the entire national conference Marc Morial as CEO and finally thousands of attendees is just another feather in our cap. The ATA is incredibly important and the history that it brings. And it’s that we’re working towards something that is even more exciting is for them (ATA) to house their permanent home here in Lauderdale Lakes that would be incredibly exciting. We all win when that happens.”

GFLCVB Vice President of Multi-Cultural Tourism added what the ATA meant from a cultural as well as economic perspective.

“The American Tennis Association is the oldest African American sports organization. This is their 98th year. As they come upon 100 years we’re looking again to expand on that. This year we have a special induction ceremony that individuals from across the nation who have contributed to the sport of tennis; predominantly people of color will be inducted into the Black Tennis Hall of Fame here tonight.

“With the ATA being here we have more than 2,500 players and their families in town. We have two hotels housing numerous adults and their families as well as the honorees. So again the economic impact we’re talking about is three to four million dollars for our county as well as those individuals that are really, really calling this their home,” added Tucker.

The ATA Awards Banquet showcased a virtual Who’s Who in the world of tennis, including some of the biggest names in the history of the ATA. The ATA Awards Dinner featured United States Tennis Association (USTA) President and past ATA Champion, Katrina Adams and this year’s Black Tennis Hall of Fame Inductees; Nick Bollettieri, Angela Buxton, Art Carrington, Dale Caldwell, Chip Hooper, Marcus Freeman, and John Wilkerson.

For the past 31 years Larry Strickland has been the head tennis coach at Howard University. He was honored as the “HBCU 2015 Coach of the Year”.

“It’s always a tremendous honor to be honored by your own. Coaching at Howard has been a labor of love. To look at all the people who have come and played and have graduated just warms my heart, meeting them and seeing them as they come back. One of the most gratifying thing is seeing all the doctors, lawyers, and whatever their appeal and interest when they came to me and seeing them graduate-all that coming to fruition for them and now having coached their kids. Anybody who’s ever been to an HBCU knows the value and what it brings in terms of confidence and strength to our young people.”

ATA Honoree and USTA President Katrina Adams is a native of Chicago. She recalled what it was like to play in her first ATA Juniors Tournament in 1976, held in New Orleans.

“We drove down to New Orleans to play in a tournament with people who looked like you. It was such an amazing experience for me where I met lifelong friends. Coaches that were there since day one, a couple of which are in the room. Some people here have been with me from a tiny young girl all the way up to the pros.

“I’m a tennis addict. I found out about the ATA in 2013 when I came down to Fort Lauderdale for a family reunion. I’d never heard of the ATA before and didn’t realize it was a big national organization. I played in the tournament and fell in love with the people, the organization and what their overall goal and achievement was for the future. So quite naturally I came back in 2014 and I’m back here again in 2015.”

ATA Tournament player Julie James, a registered nurse from New Orleans has been playing tennis for 20 years and is still going strong.

“I’ve totally enjoyed this particular event this year. I’ve had a great experience here. We came down as a group of 12 this year. All of us support an organization that focuses on our youth in an interesting way that they can help themselves.”

Nathaniel Green, president of National Pan-Hellenic Council of Broward County has been a major supporter of the ATA along with members of other Black Greek Lettered organizations.

“From the Mid-Town Summer Fest back to the various tournaments and especially for the induction of the ATA Hall of Famers, the tradition of the Greek Lettered organizations referred to as ‘The Divine Nine,’ have supported the ATA, typically our Brothers of Kappa Alpha Psi and our Sorors of Alpha Kappa Alpha who have members who are Hall of Famers and are very strategically placed in the hierarchy of the administration of the ATA.”

During a lengthy, members-only meeting on Capitol Hill on Jan. 19, members of the Congressional Black Caucus (CBC) discussed various options to protest the current President of the United States. Their protest plans centered around the annual State of the Union address. […]

“Here Comes the Boom: An Assembly for Black Women and Girls” is a conference planned by a dynamic coalition of organizations committed to developing leadership and political power for Black women and girls. A leadership that includes reproductive justice, freedom from state violence, pay equity, affordable housing, autonomy over our bodies, and representation in law-making arenas. […]