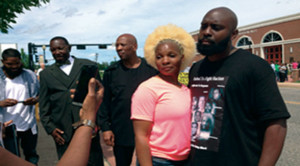 A year after his son death Michael Brown, Sr. is running an organization that helps Black youth achieve their dreams.                  (Richard B. Muhammad/The Final Call)

By J.A. Salaam, Special to the NNPA from The Final Call

FERGUSON, MO – It’s been a year since the tragic death of unarmed Black 18-year-old Michael Brown, Jr., who was shot and killed by white former Ferguson police officer Darren Wilson. The death sparked national and international protests after witnesses insisted the teenager was surrendering to Officer Wilson, who ignored the plea not to shoot.

The officer fired his weapon with seven bullets striking the son of Lesley McSpadden and Michael Brown, Sr. They ushered in a demand and movement for justice heard across the country, inside the White House and across the globe.

The young man’s body was left in the middle of the street for four and a half hours as armed law enforcement officers with nearly 20 police dogs barricaded the area and would not allow anyone to go near the slain teen, according to activists and witnesses. When the mother arrived on the scene, in total hysteria she screamed, “That was my first born son, what have you done?”

She was pushed back and not allowed to cross the yellow tape to touch her son’s dead body.

The death revealed the deep wounds of American racism and white supremacy for the world to see.

But it was young Black men and women on the ground who challenged police officers in military style gear and driving military style vehicles and equipment. Their strong stand, facing rubber bullets, tear gas canisters, weapons containing live rounds drew other young Blacks from across the country.

Then a flood of activists, journalists, photographers and ordinary people of different hues, coming from as far away as Australia and China journeyed to racially divided St. Louis county.

What has happened over the past 12 months? Have the conditions of living in Ferguson and nearby St. Louis changed much? Has the economic status improved among Blacks, Latinos and in depressed communities?

Economic and living conditions in St. Louis are still among the worst in the country. Crime is on the rise, with murders up nearly 60 percent above this time last year. According to a recent report by the St. Louis Metropolitan Police Department, 92 people were killed through the first half of the year in neighborhoods across the city. That’s compared to 58 murders over this same period in 2014 an increase of 58.6 percent.

Ferguson has three Black city council members and Andre Johnson was appointed interim police chief. The Black man is a 24-year law enforcement veteran from Glendale, Ariz. He has taken a six-month leave from his role as commander of criminal investigations to assume the duties in Ferguson.

The interim chief said his first plan of action is to build trust within the community of 22,000 people that is two-thirds Black. Interim chief Johnson also emphasized community-oriented policing that has been part of a year-long national dialogue on law enforcement.

The anniversary weekend includes the remembrance of Brown and victims of police brutality. There will be organized protests, civil disobedience, gospel concerts, workshops and national and local leaders will be participating. Joining the protestors will be civil rights activists the Rev. Al Sharpton of the National Action Network, Dr. Cornell West as well as Pastor Jamal Bryant of the Empowerment Temple in Baltimore, Md., and others are expected to participate throughout the weekend.

McSpadden is hosting a gala event for mothers who have lost children to violence at the hands of law enforcement officers or the streets. Her hope is to create a place where mothers can support one another in the midst of sorrow and pain.

“As I approach the one year anniversary of my son Michael Brown’s death, I want to first extend my heartfelt thanks for your continued prayers and demonstrated support.  I have good days and dark ones, but I am relentless in my fight for justice, and dedicated to keeping my son’s legacy alive, and as scripture says, I can do all things through God which strengthens me,” she said.

“Today I stand with God’s mercy and grace, knowing that my son, Mike Mike (as we affectionately called him) is watching over me and smiling down. I have to be his voice now, and I’m turning my tragedy into triumph, and I am stepping out of the shadows of despair and into my destiny!”

Her group, Rainbow of Mothers, will host a private event for 100 mothers who have suffered the devastating premature loss of a child. Whether from excessive police force, street violence, domestic violence, illness, or unforeseen tragic circumstances, Rainbow of Mothers wants to offer a support system that includes resources and services such as counseling, group sessions, legal advice and other helpful information to assist in rebuilding life after loss.

“It’s not okay for a traffic stop to turn into a killing. Let’s address the real issues. What are we going to do?  Please don’t just ask me how I feel. Let’s talk about what we’re going to do? Let’s talk about the real issue at hand. Whether it’s to enforce public policy for mandatory de-escalation training or get behind existing public policy like ERPA—the End Racial Profiling Act. We need to get rid of laws that don’t work and develop new laws that protect and serve the people. This means being aware of public policy before it’s too late. This means voting at every election not just presidential elections,” said McSpadden, in a written statement.

“It’s hard to forgive when someone hasn’t even acknowledged, and owned, and accepted accountability for their actions. I’m not ready to turn the other cheek right now because we still have unfinished business.  This conversation is not going away.  Ask me about forgiveness, when we see accountability,” added McSpadden

The organization Chosen for Change Foundation started by Michael Brown Sr. is having its first memorial weekend in honor of his son along with a broad coalition of St. Louis organizations that came together after the fatal shooting. The groups include Don’t Shoot Coalition, Hands Up United, Veterans for Peace, Fellowship of Reconciliation, Ferguson Action, Missourians Organizing for Reform and Empowerment, Organization for Black Struggle, Operation Help or Hush, Socialist Alternative and Tribe X.

“We will not go back to a time when a Black person killed by law enforcement was only a headline, without scrutiny or accountability. We understand the system will not stop killing us unless we make it. We will see this struggle through, for we have nothing to lose but chains, and everything to gain. We seek a world where we don’t have to say Black Lives Matter,” said Michael McPhearson, executive director of Veterans for Peace.

The most effective way for companies to connect with African Americans is by reflecting diversity in their advertisements and utilizing Black media, according to a new study by Nielsen. […]