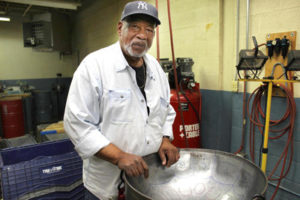 Alexis taught for 12 years at a high school in St. Paul, Minnesota, and then at NIU’s School of Music from 1985 until his retirement in 2017. Alexis co-directed the NIU Steelband with Al O’Connor and, later, Teague. Alexis was given an honorary doctorate from NIU and awarded the lifetime achievement Chaconia Silver National Award from Trinidad and Tobago in October.

“[Alexis] came to this country with $5 in his pocket, and he didn’t really know how he was going to make it, but that’s a testament to his fortitude and vision,” Teague said. “He taught himself how to build and tune the musical instruments.”

Alexis lived in DeKalb with his wife, Yuko Asada, and is survived by his children.

“He was just one of those people [for whom] it wasn’t just about personal success,” said Teague, who lives in DeKalb. “He really opened many doors for a lot of younger people, myself included. And I think that’s why so many people are hurting, because they understood his generous spirit.”

Aside from his musical skills, Alexis’ legacy will be his effect on people, Teague said.

“There’s so much that could be said in terms of what [Alexis] has done for music, but one of the things that really stands out for him is how much he showed genuine love to people he cared about,” Teague said. “So many people talk the talk, go on social media and say how much they love you, but when it comes to really showing those actions, he was always there for me and all the others.”