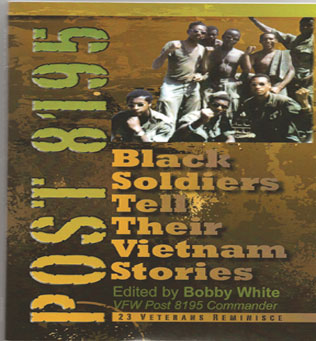 Twenty-three Black soldiers relive the horror of war as seen through their own eyes as co-authors of the book titled, Post 8195: Black Soldiers Tell Their Vietnam Stories.

South Floridians gathered recently at the African American Research Library and Cultural Center (AARLCC) Auditorium to witness a bit of history in the making. The program paid tribute to former Black soldiers who served in Vietnam. Sixteen of the 23 Black soldiers who shared their personal experiences during the Vietnam War in a book entitled, Post 8195: Black Soldiers Tell Their Vietnam Stories, edited by Bobby White, VFW Post 8195 Commander, who also attended the ceremony.

For the millions of soldiers who served their country during the Vietnam War during the 1960’s it was a very turbulent time in America. The country wrestled with its own consciousness regarding the civil rights of its Black citizenry at home and what many Americans believed was an unjust and extremely unpopular war in South East Asia, known as the Vietnam War. This posed quite a dilemma for Black soldiers who risked their lives in the name of freedom and democracy abroad yet still remained second class citizens, estranged from sharing in the America Dream of freedom, justice and equality.

Elaine Stevens served as the Mistress of Ceremony along with Co-MC and Vietnam War veteran Jerry Rushin during the program. She set the tone for the afternoon as she reminisced about her experiences as she encountered Vietnam veterans returning from the war as a college student in Massachusetts.

“I would like to welcome you to this very auspicious occasion as we weave another thread into the tapestry of American history, by opening our hearts and our minds to Black soldiers telling their Vietnam story.”

“The Black Vietnam War veterans continue in the tradition of the returning World War II veterans after they came home from Europe and the South Pacific. Once they were exposed to the possibilities of a larger world where men like the Tuskegee Airmen proved they were competent capable and courageous as any other protectors of the American freedom. They fanned the embers that became the flame; the fire storm that spread across America called the Civil Rights Movement.”

“Black soldiers came home determined to fight for equality and respect at home as fiercely as they had fought for freedom abroad. Today we want to give the Vietnam War vet who is here, men and women their long, long overdue recognition and appreciation,” Stevens added.

Rushin was unlike many other soldiers barely out of high school who found themselves embroiled in a war halfway around the world in the jungles of Southeast Asia. He rose through the ranks to become a Sergeant E-5.

Rushin recalled his experience as an 18-year-old soldier serving two years aboard a medivac helicopter during the Vietnam War.

”When I left here I was a boy. When I returned from the war I was a full grown man.”

Vietnam veteran Bobby white has served as the Team Leader at the VET Center in Fort Lauderdale for 32 years and is the Commander of Post 1895 in West Park, Florida. He has worked on behalf of veterans most of his adult life and spearheaded the effort to document the untold story of Black Vietnam soldiers. White, along with 22 others reminisce in graphic detail what it was like to be in combat during times of war. Their stories are chronicled throughout the pages of the book. Now they too will be remembered as American heroes. Their stories will be preserved and never forgotten throughout the annals of American History.

White served with the Forth Infantry Division in the United States Army for 12 months in Vietnam as a Sargeant and combat soldier.

“Today we’re here for a book signing for a book called, “Post 8195 Black Soldiers Tell Their Vietnam Stories.” The book is about 23 authors who went through therapy to tell their stories from their Vietnam experience. These authors are from the Army, Navy, Air Force, Marines. This was a time back during the 1960’s and ‘70’s when our country was a little different. We were fighting a war, a war here at home as good Americans and then we had to fight for America in Vietnam. The book has all of that in it and also has the historical perspective of how we got into Vietnam. So we see the book as a family ready to read book from an educational perspective. It has a therapeutic touch because a lot of the guys that served, who wrote this book are going through their readjustment. These guys had to go through post-traumatic stress syndrome (PTSD), and some of these guys didn’t receive compensation 30 to 40 years after the fact. The book is a good book, a must read book for this time. These are the men who have served in a war and are telling these stories 45 years after the fact. So it is a more comprehensive perspective of the Vietnam War from a Black perspective.”

Rev. Jimmie Brown, also known as Chief Jimmie Brown, the host of WHQT/Hot 105’s community forum known as Hot Talk, is a Vietnam veteran who served as a pastor 37 years before his retirement from Harris Chapel in Fort Lauderdale. He also worked for the Miami-Dade Police Department for 30 years.

“I’m here as a Vietnam vet who spent two tours there to celebrate this book release. I’m proud that I served. I was an air policeman in the United States Air Force. I look at that experience as two fold. I’m grateful to be here and grateful to be alive. And I’m also kind of sad when I think about some of the guys that I played football with in high school who are not here because of that war.”

“There were a disproportionate number of African Americans who lost their lives during the war. I pray for those survivors who are still behind. Let us not forget that so many brothers gave their all- gave their lives so that we could all have a better life.”