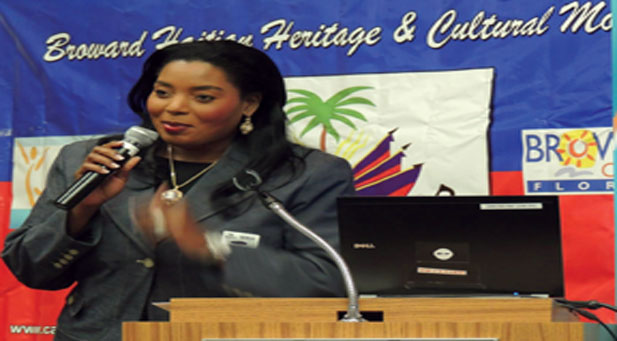 Vice Mayor Barbara Sharief is no stranger to struggle! As the soon-to-be first Black female Mayor of Broward County, she is more than prepared to meet every challenge head on.

On Nov. 19, 2013, Sharief will take the oath that will place her name firmly in our county’s history books. But her journey to this defining moment was far from easy.

Born into a loving family, Barbara grew up in Miami, Fla., as one of eight children. Her mother was a retired teacher and homemaker and her father was an entrepreneur and bread-winner.

Her commitment to serving others was developed as a child when she would help her father with a program he started for needy families. Barbara would spend Fridays, Saturdays and Sundays packing up groceries and distributing food to those in need.

It was during this time that her father shared words that became a guiding force in her life, “If you get in a position in your life where you could give something back, you should always do that.”

Unfortunately, at the age of 14, Barbara lost her father to gun violence. He was shot and killed by a 15-year-old attempting to rob his clothing store. He never saw his daughter live out the words and lessons he so carefully planted in her.

It was at this moment that Ms. Sharief’s life took a drastic turn. Her family’s home was foreclosed and they began the all-too-familiar dance of relocation prevalent among low income families.

She had to get a job to help her mom provide for her younger siblings and she witnessed her family go from self- sufficient to government dependent— utilizing programs such as welfare and social security to sustain their basic needs.

In fact, once she got to college Sharief recalls, “There were times when I went to school and I didn’t have anything to eat. And I would go to the church and they would give me food on Sunday. I would take little Tupperware containers;  freeze the food and that’s how I ate for the week.”

But despite her financial and familial struggles, Barbara graduated from Florida International University and went on to earn a Master’s degree. She is currently one of the most successful business owners in South Florida, but even that title has not come without challenges of its own.

Barbara’s business, South Florida Pediatric Home Care, started over a decade ago with her mom and 30 nurses.  Today it provides 637 jobs for nurses, therapists, and internal office staff.

Hurricane Wilma decimated the office space where Sharief’s business was housed in Miramar. Windows were blown out, floors flooded, technology destroyed and patient records damaged. Barbara was forced to start over. No stranger to over-coming obstacles, she procured new office space at her current location and continued to build and grow.

The challenges Barbara was to face did not end with the re-building. Most recently, her reputation has been attacked in the media due to a Medicaid billing issue which she chose (under the advice of legal counsel) to settle.

Rather than run up costly legal fees that would eventually equal or trump the alleged billing discrepancy,  Sharief chose to pay the fee and move forward with her company’s commitment to providing quality healthcare to South Floridians.

According to Sharief, “I signed that settlement agreement reluctantly because I felt we were right.”   Unfortunately many small business owners like Sharief learn that what is right and what is prudent don’t always mix.

Looking towards the future, Sharief has several projects at the top of her to-do list as mayor. First she is committed to focusing on the needs of small business owners via a comprehensive program to support profit and non-profit businesses.

Secondly, she wants to encapsulate the knowledge and experience of exiting commissioners into video diaries. As a result of the Sunshine Law, current county commissioners cannot speak to each other regarding county business out-side the dias. This creates a serious void when new commissioners are brought in and have to spend months catching themselves up without the benefit of the exiting commissioner’s knowledge. Sharief’s innovative new program will alleviate this information gap.

Finally, Sharief wants to focus on improving employee morale and appreciation at the county commissioners office. “I want people to understand that while we are there for the business of the county, we also appreciate the input that the staff has and we respect them individually.”

In addition to her own priorities, vice-mayor Sharief will also be responsible for overseeing several ongoing labor projects: the port dredging and expansion, the airport terminal improvements and new runway; and the courthouse expansion and parking garage construction.

Surely Sharief’s  personal and professional experiences have more than prepared her for this defining moment. She has been lovingly dubbed the Commissioner on a Mission—now she will be the Mayor on a Mission!