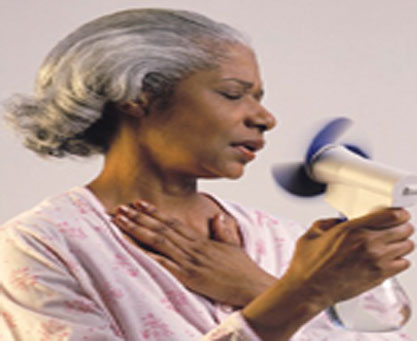 By Elaina Johnson, Special to the NNPA from Howard University News Service

WASHINGTON, D.C. (NNPA) – Sarah Finney, 57, said she gets hot flashes throughout her body at least once an hour.  She even wakes up in the night with so much perspiration that she looks like she just left working out at a gym, she said.

“Hot flashes are very annoying,” said Finney, a married mother of two who declined to use her real name. “A surge of heat goes through my body, sometimes accompanied by nausea. As the energy builds, I begin to sweat from my hair, neck, chest and underarms.”

Finney, a vegetarian, said she hoped eating healthy and her intense daily routines as a marathon runner would alleviate the symptoms, but no luck.

Finney, who lives in Alexandria, Va., is experiencing the results of menopause, a natural decline in reproductive hormones that affects millions of woman annually when they reach their 40s or 50s.

For women going through menopause, just one day of hot flashes can be too much. Imagine 14 years. A new study published in JAMA Internal Medicine, a medical journal of the American Medical Association, found that women could experience hot flashes for up to 14 years, and that African-American women like Finney typically experience the symptoms longer.

Finney has been going through it for 10 years.

The 17-year study of 1,449 women across the U.S. found that while on average, the women endured the symptoms for about seven and a half years, Black and Hispanic women experience hot flashes for significantly longer than White or Asian women. The median was 10 years for African Americans, nearly nine years for Hispanics, six and a half years for White women, about five and a half years for Chinese and nearly five years for Japanese.

This is the only study that has looked at a very diverse population, “said Dr. Ranit Mishori, associate professor of Family Medicine at the Georgetown University School of Medicine.

“No one knows for sure why African-American women are at risk for a longer duration of hot flashes. There could be a relationship between hormone levels, genetic differences, body mass index, the number of children you have or the age you began having children.”

Though the study’s results may not give the quick relief women hoped for, it allows doctors and medical professionals to give patients realistic expectations and find ways to help alleviate the hot flashes.

“This is not a fun thing for the doctor or the patient to realize,” Mishori said. “However, there are ways to manage the symptoms including hormone replacement therapy.”

Hormone replacement therapy is medication containing female hormones to replace the ones the woman’s body no longer makes after menopause.

This method can be a good choice for certain women, depending on their health risk, Mishori said. Women who consume estrogen pills are alleviated from hot flashes and other symptoms of menopause, she said.

The down side is that hormone therapy has been linked to increased risk of breast cancer, stroke and heart disease for some women.

Lifestyle changes, such as diet and exercise, may help some women, health officials said, and there are also non-hormonal medication and supplements that can help. These things may not shorten the duration of hot flashes, but it may lessen the affect and intensity of them.

If the symptoms are unbearable, health officials suggest you consult with your doctor.

Finney said she is resigned to the day-to-day struggle with the condition.

“Menopause is just something we have to deal with as women,” she said. “We all must continue to move forward. This is a part of life.”

From Mary Church Terrell to Barbara Lee: Black women in the peace movement

From Mary Church Terrell to Barbara Lee: Black women in the peace movement
[…]

Don’t get too excited when Trump attacks George W. Bush over Iraq

Don’t get too excited when Trump attacks George W. Bush over Iraq
[…]