Shifts the Focus to the

at the Republican and Democratic Conventions 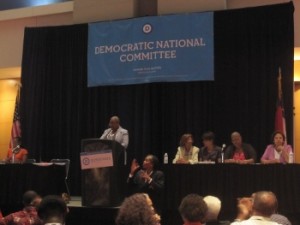 Washington, DC – In their continuing efforts to make Black women’s issues a top priority and remind elected officials and candidates of the voting power of Black women, the National Coalition on Black Civic Participation’s (NCBCP) Black Women’s Roundtable co-hosted non-partisan round table discussions in conjunction with the Republican National Convention (RNC) in Tampa, FL, and this week at the Democratic National Convention (DNC) in Charlotte, NC.

At the Charlotte Convention Center Black Women’s Roundtable joined with Higher Heights for America to co-host, “Harnessing Black Women’s Political Power: The Chisholm Effect 40 Years in the Making,” a celebration and discussion about the power of the sister vote.

Hazel Dukes, president of the NAACP New York State Conference, opened the session delivering an electrifying speech outlining the historic run of Congresswoman Shirley Chisholm and chiding leaders for, 40 years after Chisholm’s run, not properly recognizing the power of the black women’s vote.

Reminding people of the Pew Research findings that the surge in black voter participation in 2008 was driven by increased participation among black women, Melanie L. Campbell, president and CEO of the NCBCP and convener, Black Women’s Roundtable said, “We’re celebrating the phenomenal power of the sister vote. Black women are getting their swagger back in 2012. They’re not just getting themselves prepared to vote, they are making sure their family, friends and neighbors are prepared to cast a ballot that counts in this very important election.” 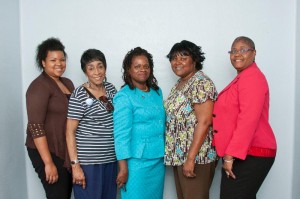 Campbell adds, “Black women are leaders in turning out our community; our issues should be a top priority for elected officials and we need to see Black women appointed to powerful positions.”

Over 30 Florida leaders joined national leaders for a more intimate discussion about the continuing economic crisis, criminal justice reform, and voter suppression tactics, during RNC round table held at St. Petersburg’s Center for Community and Economic Justice. In addition to the conversation, Barbara Arnwine, executive director of the Lawyers Committee for Civil Rights Under the Law, provided information and tools like the 866 OUR-VOTE hotline, to help the women educate their constituents, organizations and community members in countering the rampant black voter disenfranchisement in Florida.

BWR is an intergenerational women’s network of the NCBCP, a non-profit, non-partisan organization dedicated to increasing civic engagement in Black and underserved communities and developing new leaders.  For more information visit www.ncbcp.org.

Before going to get a fresh cut or your “nails did,” you may want to consider this potential health concern. Customers in nail salons and barbershops may be at risk for hepatitis infection […]