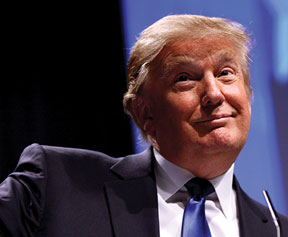 The budget plans to cut almost $4 billion in Pell Grants. More then half of African American college students receive Pell Grant awards each year. Trump’s budget also eliminates Meals on Wheels, a program that delivers roughly 218 million meals to the poor and elderly each year, according to a Meals on Wheels fact sheet. Minorities account for nearly 30 percent of seniors that receive home-delivered meals.

Trump’s budget includes $1.5 billion to build a wall along the southern border of the United States. Despite Trump’s “America First” rhetoric, there’s no specific allocation to solve the lead water crisis in Flint, Michigan, a $150 million fix, based on some estimates.

“We can’t spend money on programs just, because they sound good. Meals on Wheels sounds great,” said Mick Mulvaney, Trump’s budget director, during a press briefing at the White House in March. Mulvaney suggested that Meals on Wheels, and other programs that offer free meals to students at school, were ineffective.

Trump’s budget also eliminates the U.S. Interagency Council on Homelessness, which costs $3.6 million a year, and helps more than 500,000 homeless people in the U.S. and over 42 million living in poverty in America overall.

Trump’s budget adds $54 billion for defense, a benefit to defense contractors in a Department of Defense that several reports indicate has a massive problem with waste and fraud.

The irony of Trump’s severe budget cuts against the back-drop of the costs to protect the new First Family as they vacation and conduct business for Trump’s empire, hasn’t been lost on the media.

Reuters news agency reported in February that $309,000 a day is being spent to protect Trump Tower in New York City, because First Lady Melania Trump hasn’t moved into the White House. If she only stays at Trump Tower for 200 days, her decision will cost American taxpayers at least $61.8 million, this year. So far, she has spent very few days at the White House.

Trump’s weekend trips to his Mar-a-Lago estate in Florida cost American taxpayers about $2 million per trip, according to The Washington Post. The Sun-Sentinel reported that Trump vacationed at Mar-a-Lago five weekends between January 20 and March 23.

“Judicial Watch, a conservative group that tracked the cost of Obama’s travel expenses, estimated that $97 million was spent during his eight years in office,” “Business Insider” reported.

Trump’s budget calls for $9.2 billion in cuts at the Department of Education. Trump plans to shift at least $1.4 billion to bolster charter schools and private school vouchers. That shift, much, like $54 billion for defense, would benefit for-profit and non-profit groups seeking lucrative contracts in those areas from the federal government.

“With a 13 percent cut to federal education funding a-mounting to a nearly $4 billion reduction in Pell Grants, and almost $200 million cut from TRIO [a federal outreach program for low-income students] and Gear Up, and no increase to specific funding [for Black colleges and universities], this budget guts the support programs that build a pipeline of deserving students to these colleges and universities,” stated Rep. Alma Adams (D-N.C.) “It also lacks much needed resources for infrastructure improvements on HBCU campuses and measures to increase college affordability.”

Adams is the co-chair of the HBCU Caucus in Congress.

“Although President Trump promised a ‘New Deal for Black America,’ his budget slashes the federal workforce and cripples domestic programs such as federal student services TRIO programs, LIHEAP, grants for after school programs, Community Development Block Grants, and Community Services Block Grants,” wrote Richmond (D-La.) in response to Trump’s budget. ”All of this hurts the African-American community. In addition, despite his promise to support and strengthen HBCUs, President Trump proposes to give these schools the same amount of funding they received last year.

Richmond continued: “This budget proposal is not a new deal for African Americans. It’s a raw deal that robs the poor and the middle-class to pay the richest of the rich.”

The Waco biker riot and the lexicon of racism

The Waco biker riot and the lexicon of racism
[…]