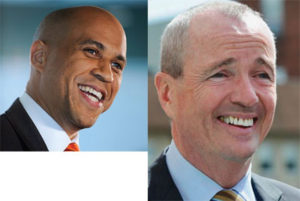 By Matt Friedman and Marc Caputo

The man who wants to be governor of the Sunshine State is looking to pluck some money from the Garden State.

Tallahassee Mayor Andrew Gillum, a liberal who won the Democratic Party’s nomination in an upset last month, will be the “special guest” at a Sunday fundraiser in Edison, N.J. with a host committee that includes Sen. Cory Booker (D-N.J.), Gov. Phil Murphy and U.S. Reps. Bonnie Watson Coleman and Donald Milford Payne, both New Jersey Democrats The fundraiser at the Pines Manor party venue benefits Gillum’s political committee, Forward Florida. Tickets range from $250 to $5,000, according to the invitation.

The New Jersey event marks the first major event for Gillum hosted by a senator or a governor and foreshadows the national interest in Florida’s gubernatorial race, one where there’s a stark choice between the deep-blue liberal Gillum and Trump-red conservative Ron DeSantis, who recently stepped down from his seat in the House.

Gillum, who had been trailing in every major poll before Florida’s multi-candidate Aug. 28 primary, instantly became a national figure with his surprise win and history-making candidacy as the Florida Democratic Party’s first African American nominee for governor. The following day, national interest and the racial dynamics of the contest intensified when DeSantis used the phrase “monkey this up” regarding what he believed would be the effect of Gillum’s liberal policies on Florida’s finances. DeSantis denied the remark was intended to be racial.

Booker’s fundraising firepower is crucial for Gillum, who had been an underfunded candidate until his primary win. Since the primary, Gillum’s campaign and political committee have together raised more than $5.4 million. DeSantis’ campaign and his political committee, Friends of Ron DeSantis, have hauled in more than $4.3 million. Huge sums of cash are a hallmark of campaigns in Florida, which is so big that it necessitates major TV ad spending in its 10 major media markets. During the height of campaign season, campaigns could spend as much as $3 million weekly on saturation TV ad campaigns.

Booker is New Jersey’s first African American senator and could benefit from making powerful friends in major states like Florida. Booker acknowledged he’s thinking about running for president in 2020 in a New York Magazine profile.

Conspicuously absent from the host list: Bob Menendez, New Jersey’s other Democratic senator who survived a corruption trial rooted in his friendship with a Florida eye doctor.