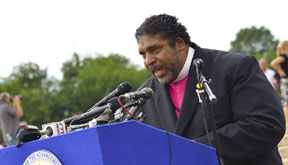 Building the Movement to fight extremism

Reverend William J. Barber II, the president of the North Carolina state chapter of the NAACP, says that Americans are quickly learning that moral resistance is a civic duty under President Trump. Photo taken during a NAACP demonstration on the steps of the Lincoln Memorial in Washington, D.C. in June 2015. (Freddie Allen/AMG/NNPA)

On Friday, January 27, 2017, President Trump wrapped up his first week of executive orders with a temporary ban on refugees and travelers from several Muslim countries. Effective immediately, this order impacted tens of thousands of people, leading to the detention of travelers in airports across the United States. Mass protests erupted, a federal judge issued a temporary injunction against the ban, and team Trump responded by attacking the judiciary branch and the media alike.

Moral resistance, Americans are quickly learning, is a civic duty under President Trump.

But even as mass protests remind us that the Constitution was not un-elected last November, history suggests that our resistance must prepare for a long-term movement. Things are going to get worse in America before they get better. We will win, but it’s not going to be fast and it’s not going to be easy. Lest we lose perspective, we need to soberly face the challenge before us.

The beginning of Trump’s ad-ministration marks a turn from the immoral rhetoric of a divisive campaign to the immoral action of an anti-democratic administration. Those who never imagined Trump could win the Republican primary—even less the White House—are right to be outraged at the hubris with which he disregards observable facts, projects delusions of grandeur, and attacks those who disagree with him. Trump is intentionally outrageous. But outrage, he knows, is a difficult emotion to sustain. Repeat an alternative fact often enough, and it begins to sound banal.

From Hitler to Franco to Suharto, fascist regimes in the 20th century seemed implausible in their beginnings. Nevertheless, their strong men defied the political establishment and appealed to “the people,” even as they undermined the democratic process, a free press, organized labor and the arts. In no instance, did this happen all at once, and in every case there were opponents who expressed outrage at some point (80 percent of Germans disapproved of the Kristallnacht attack on synagogues).

But outrage did not stop fascism. The consistent scapegoating of some minority group inevitably turned national attention to security, law and order. Every fascist regime has blessed its corporate leaders and invested in infrastructure projects; in turn, so-called religious leaders consistently bless the marriage of God and country. The only thing that can stop fascism is a broad coalition of people determined to stand together against extremism.

Trump’s message could not be clearer. He insists he is returning government to “the people” while delegitimizing the press, the electoral process, and the clear feedback he is receiving from the American people via protests and favorability ratings. His Tweet-storms against the nation’s most respected media outlets are as dangerous as his unsubstantiated claim that 3-5 million people voted illegally in the 2016 election, his executive order that led to the detention of visa-holders, his nomination of the wealthiest cabinet in US history, and his prosperity pastors who preach a heretical gospel of national security. Each lie and extreme action is an offense against democracy itself.

What will protect us, four years from now, from a fascism that delays normal elections during war time?

When extremists took over state government in North Carolina in 2013, we had to face the reality of anti-democratic populism in 21st-century America. Yes, we were outraged. But when 17 moral leaders were arrested in an act of civil disobedience on the first “Moral Monday,” we committed ourselves to a fight with every non-violent tool available to us in the courts, in the streets, in the legislature and at the ballot box. We spent some long nights in jail, and we suffered some hard defeats in the midterm elections. But this past November, when Trumpism swept the South, extremists in North Carolina lost control of two of the three branches of government.

Building the Movement to fight extremism

In addition to that, a federal court has ordered special elections in 2017, because the racially gerrymandered legislative districts, which gave extremists a supermajority in the legislative branch, were deemed unconstitutional.

Moral Mondays in North Carolina offer lessons for how we can resist the rise of fascism in America. First, we need a sustained moral resistance. We cannot let this debate be about party. Some things aren’t left or right. They’re right or wrong.

Democrats and Independents must link up with Republicans who are moved to resist, even as political differences remain (11 percent of Moral Monday supporters were Republican in 2013).

Second, we have to build cross-racial, cross-class coalitions that put a face on policy changes that hurt real people. A child died, because his visa was not honored last week. Next week, it may be US-born children facing deportation with their undocumented parents. The week after that, my daughter with a pre-existing condition could lose her healthcare. We have to build a platform that helps America see these people, and we all have to show up for each of them.

Third, we must be willing to put our bodies on the line in nonviolent direct action and escalate our campaign until the cost of oppression is greater than the willingness of oppressors to continue.

Finally, we must be committed for the long haul. Our protest cannot be about a moment. We are building a movement of people who are not only determined to fight extremism, but also to build the America that has not yet been. We are working for a Third Reconstruction, and we know our history well enough to know that this work will not be fast or easy.

Fascism is not foreign to Western democracy. When we give in to the worst demons of our nature, it is a real possibility. With the ascent of Steve Bannon to the White House, we are closer to fascism than America has ever been before. But we also know what can beat fascism. Others fought before us; it’s our time now. We needed a movement of moral resistance in every community, holding elected officials accountable for the extremism that is fast becoming U.S. policy.

Ghosts of the Orange Bowl
[…]

A call to curb expansion of charter schools in Black communities

A call to curb expansion of charter schools in Black communities
[…]

Seasons Greetings from the staff and family of the Westside Gazette

When we take all things into consideration, we are truly blessed. With whatever portion of health, strength and mental ability, we should accept it as a gift. […]