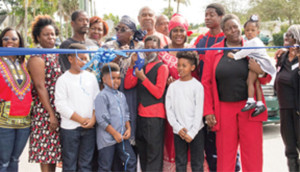 Led by Commissioner Beverly Williams, the ribbon cutting ceremony was done in an effort to publicly announce the approval of a resolution dated back to May 13, 2014 when the City Commission of Lauderdale Lakes voted unanimously to ho-nor the memory of Dr. Gwendolyn Hankerson by asking Broward County to provide alternate naming of Northwest 29 Street from State Road Seven to Northwest 33 Avenue as Dr. Gwendolyn Hankerson Street for all that she has done in the City of Lauderdale Lakes. Commissioner Beverly Williams said, “Dr. Hankerson was an inspiration to our City; extremely hardworking and made such a powerful difference in many of the lives here in Lauderdale Lakes and Broward County.”

During the street dedication, Mayor Hazelle Rogers presented the Hankerson Family with a Proclamation honoring their beloved relative and took part in cutting the ceremonial ribbon to officially open the Dr. Gwendolyn Hankerson Street to the public. The day was topped off with a beautiful re-flection message given by Terri Hankerson and Alice Hankerson-Harris; daughters of the late Dr. Gwendolyn Hankerson, and a light brunch with plenty community fellowship.

Dr. Hankerson was the first Black to run for office in Lauderdale Lakes. Although she was twice unsuccessful, Hankerson remained active in local politics, she campaigned for successful candidates. She served on numerous Advisory Boards in the City and also fought for literacy, mentored students and helped organize community events. Commissioner Beverly Williams said “Our City was lucky to have her and dedicating this street is a small token of our appreciation for the tireless work she put in.”

For more information on the street dedication,  contact Lauderdale Lakes Public Information at (954) 535-283 or Email: info@Lauderdalelakes.org.