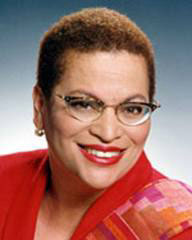 Supreme Court Justice Clarence Thomas is at it again. Whenever he opens his mouth about race, he displays a surprising myopia for a 65-year-old African American man who was raised in the Deep South during a segregated era. During his confirmation hearing, Thomas excoriated his own family, speaking of his sister as someone (and I paraphrase) waiting around for her welfare check.

He was equally contemptuous of other members of his family, even as they were loyal to him and attended some of his hearings. A notable point in his confirmation hearing was a moment when he said he experienced the pain of racism when his grandmother could not use a desegregated bathroom. I’d remind him now, as I did then in a column, that it wasn’t personal, and it wasn’t just his grandmother, it was everybody’s grandmother. That’s the collective and institutional knowledge than Thomas lacks.

The old Clarence Thomas resurfaced when he went to Atlantic University in West Palm Beach, Fla. to deliver  a speech.

According to news reports, he said: “My sadness is that we are probably today more race and difference-conscious than I was in the 1960s when I went to school. To my knowledge, I was the first Black kid in Savannah, Georgia, to go to a white school. Rarely did the issue of race come up. Now, name a day it doesn’t come up. Differences in race, differences in sex, somebody doesn’t look at you right, somebody says something. Everybody is sensitive. If I had been as sensitive as that in the 1960s, I’d still be in Savannah. Every person in this room has endured a slight. Every person. Somebody has said something that has hurt their feelings or did something to them –left them out.”

People didn’t talk about race much until the 1950s and early 1960s, and when they did, then, they did them with a whisper. When Emmett Till was killed in 1955, there were few African Americans who took White folks to account for this, except for the large African American organizations, such as the NAACP. Because of their very public stance on the issue, the organization was described as “subversive,” their members (and the members of other organizations) were labeled “outside agitators”.

Before Till, there were thousands of incidents, few making headlines. For African Americans, acts that left African Americans lynched and killed, run off their property, and just plain disappear were not much discussed. It was understood that those harassed are those who “stood up to the White man.” For whites, this fatal harassment of people of African descent, the outright theft of property, rape of women, and a litany of other oppressions, was nothing more than business as usual. White men could rape Black women, beat up or kill Black men, and do whatever they wanted without fearing reprisals. Some of these oppressions are only now being uncovered. Of course, people are talking about race.

Furthermore, things like employment discrimination are not simple “slights” that result in hurt feelings. Instead, they are institutional attacks on a community’s economic well being. Differences in the well-documented ways that interest rates are offered for homes and automobiles are not slights but pernicious economic discrimination. Thomas willfully reduces institutional racism to oversensitivity, when one more cognizant of history might acknowledge that both micro and macro inequities impact economic advancement, and quality of life.

Thomas is joined by George Zimmerman, who says his massacre of Trayvon Martin has nothing to do with race, and has cast himself as the victim in a tragedy he perpetuated. Thus, Michael Dunn, objecting to loud music, aimed multiple bullets at a vehicle holding four young Black men, killing one, Jonathan Davis, who was leaning away from the window of the vehicle, weaponless. Hiding behind the Stand Your Ground law, he says he felt threatened. Others posit (more correctly) that he objected to a young man mouthing off at him when he demanded that they turn down their music. If he felt so “threatened” why did he even bother to approach the car of young men minding their business?

What has race got to do with it? In the time when people didn’t talk about race, this question might not be asked. Today, because people perceive “slights,” (like the murder of young Black men), the question of race inevitably and appropriately comes up. Thomas dissented in the Hudson case, which awarded an inmate $800 after he claimed cruel and unusual punishment when he was beaten so badly that his dental plate was broken in his mouth. I guess he regarded police brutality as a simple “slight.”

People talk about race (and gender) more because they are not muzzled by an institutional racism that made it impossible to have these conversations without consequence, because “race champions” were beaten, firebombed, and killed because they dared seek social and economic justice. Thomas may lack institutional memory but he, frankly, makes a fool of himself when openly displays his ignorance.