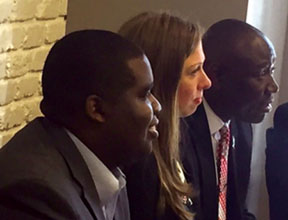 Clinton campaign takes nothing for granted in Florida

A few days before the Florida Primary, Chelsea Clinton was campaigning hard in Jacksonville. The next day she was on to Tallahassee where she spoke to 300 women at the Women’s Club, before heading to Early’s Kitchen on the Southside. The African American favorite was packed with patrons and the famous supporting Hillary Clinton for President.

Chelsea Clinton, pregnant with her second child, sat on a stool talking with ease about her mother’s hopes for the nation. She also discussed the need to beat back the hate speech enveloping the Republican campaign. “The racism, the sexism, the Islamophobia, the homophobia, the anti-immigrant rhetoric, the anti-workers rhetoric … it is an almost endless list,” she said. “And then the policy ideas that flow from that – to build a wall, to expel 11 or 12 million people who are here working hard for lives of dignity and opportunity and promise for themselves and their families, to keep a list of every American Muslim.” Chelsea took her campaign on to Sarasota, St. Petersburg and Orlando.

Meanwhile the day before the Super Tuesday election, her father, President Bill Clinton held a rally at Florida A&M University. Thousands of students from Rattler Nation turned out to hear from the former president. Clinton talked about his wife’s vision of “Ladders of opportunity for everyone not walls.” One plan is to allow student loans to be paid off over longer periods of time like a mortgage. Another interesting concept would encourage insurance companies to lower premiums for good health habits. Clinton was welcomed like a rock star. He has a strong relationship with FAMU having spoken at graduation and campaigned on campus two times since 1992. Confirming that the Clintons take nothing for granted and that Florida remains at the top of the must have victories.