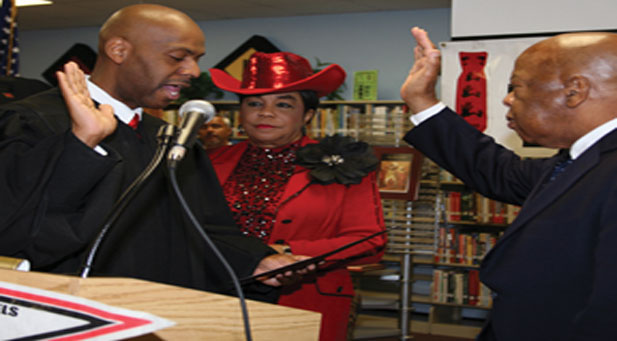 Congressman John Lewis stopped by Booker T. to talk to the 5000 Role Models about his number one New York Times bestselling graphic novel memoir trilogy March,  which he co-authored and which also chronicles his experiences during the Civil Rights Movement.

Congressman Lewis was inducted into the 5000 Role Models of Excellence Project as an honorary member.

He also gave signed copies of book one to about 45 Role Models.

Congressman Lewis was in Miami to participate in Miami Book Fair International, sponsored by Miami-Dade College.

“It is an honor to have an American hero like Congressman John Lewis visit Booker T. Washington Senior High School to speak to the Role Models and to share his experiences in the struggle for civil and human rights.

“I am humbled beyond words and truly honored that the legendary civil and human rights activist is now a member of the 5000 Role Models of Excellence Project. Congressman Lewis brings exemplary leadership, intellect, vision and compassion to the program.

“For half a century, he has been an extraordinary role model for millions. Now, he is an  official role model for a very special group of boys. Congressman Lewis’ participation in the 5000 Role Models of Excellence Project is another important step in our decades-long quest to stop the school-to-prison pipeline and empower young people to realize their dreams,” said Congresswoman Wilson.