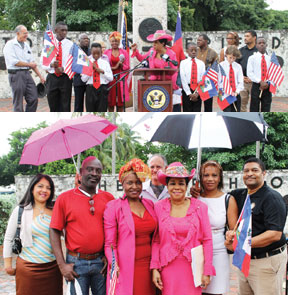 The Haitian Family Reunification Parole program will expedite family reunification for eligible Haitian relatives of U.S. citizens and lawful permanent U.S. residents. The program will also promote safe, legal, and orderly emigration from Haiti to the United States. These steps will reunite tens of thousands of Haitian families and provide a vital lifeline to Haiti’s economy.

As a lifelong champion for Haiti, Congresswoman Wilson has led the effort to establish the Haitian Family Reunification Program by directly engaging with President Obama, the U.S. Department of Homeland Security, and her colleagues in Congress.

“All of the hard work and advocacy has paid off,” said Congresswoman Wilson. “This is a great win for my Congressional District which is home to the largest Haitian community in the U.S.”

“I look forward to personally welcoming and rolling out the red carpet for the first wave of recipients of this program.”

Currently, more than 100,000 Haitians with approved family-based immigrant visa petitions are forced to wait for years in Haiti.

The educational equity and excellence project

The educational equity and excellence project
[…]

Does the CBC really care about Black people?

Does the CBC really care about Black people?

During his speech at the 45th Annual Legislative Conference (ALC) Phoenix Awards Dinner, President Barack Obama celebrated the critical role that Black women have played in “every great movement in American history” and pledged to address challenges they face in the workplace and in the criminal justice system. […]