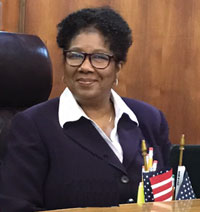 From Monica Cepero and  Felicia Littky

BROWARD COUNTY, FL – Broward County Administrator Bertha Watson Henry has received an International City/County Management Association (ICMA) Award for Career Excellence, the first African American woman and one of only a handful of women to ever receive the coveted award, which recognizes an outstanding local government administrator who has enhanced the effectiveness of government officials and consistently initiated creative and successful programs.  It was established in memory of Mark E. Keane, a former ICMA Director.

“County Administrator Bertha Henry is acknowledged by this County Commission, her employees and her peers as a person of character, integrity and action,” said Mayor Sharief. “Nothing could make me prouder of her and of Broward County than announcing this incredible, well-deserved honor.”

Mayor Sharief went on to highlight some of Mrs. Henry’s noteworthy accomplishments : Emergence from the 2008-2013 economic recession with minimal impact to the workforce or sacrifice to community services; One of only four counties in Florida to receive a AAA rating from all three investor municipal bond rating agencies – Standard & Poor’s, Moody’s Investor Service and Fitch Rating; Focus on targeted industries that has created opportunities for small business and inter-national trade, and a Six Pillars program cited as a Best Practice example of how county leaders can influence a local and regional workforce system that promotes economic growth and improves quality of life for residents; Major runway expansion and terminal renovations at Broward County’s Fort Lauderdale-Hollywood International Airport (FLL), an award-winning, world class airport which is today ranked 21st in the country in passenger boarding and generates $13.2 billion in annual economic activity; Terminal expansions and a new Florida East Coast Railway intermodal container transfer facility that helped propel Port Everglades into one of the three busiest cruise ports in the world and a leading container port, generating $29.9 billion in annual economic activity; An $11.2 billion tourism economic engine; a public-private partnership that is expanding Broward’s water-front Convention Center and adding a new headquarters hotel; and the successful re-nourishment of miles of beach-front, key to tourism; A new $261.5 million, 20-story, 714,000-square-foot Broward County Courthouse, along with a new 40,000 square foot animal adoption center; ongoing construction of a new Broward Addiction Recovery Center; re-negotiation of financial agreements to protect the County’s interest in its $220 million, 872,000-square-foot arena, the fourth largest National Hockey League venue in the U.S. and one of the top 30 arenas in the country; Regionalization of E911 service and an investment of more than $113 million in infrastructure improvements – Broward residents now boast one of the fastest E-911 call answer times in the nation; National accreditations and recognitions for Broward’s Emergency Management Division, Medical Examiner’s Office, Child Care Licensing, Sexual Assault Treatment Center, Purchasing, Accounting and County park and library systems; Upgrading of transportation and paratransit systems, addition of express bus service and improved signalization to alleviate commuter stress; Important community issues such as homelessness and mental health addressed through creative community-based approaches utilizing grant funding; Establishment of the Southeast Florida Regional Climate Change Com-pact and Climate Change Action Plan, recognized as a national model for coordinated regional climate action; A regional approach to solid waste disposal and expanded infrastructure for alternative fuel vehicles; a new plant to turn restaurant fats, oils and grease into renewable energy; participation as one of only 22 governments in the nation in the Go SOLAR Rooftop Challenge grant to promote local growth of solar energy, and the first to receive a 4-STAR (Sustainability Tools for Assessing and Rating) Designation.

As a leader, Ms. Henry solicits employee engagement, promotes employee development and encourages a healthy work-home life balance. Broward County has been recognized as a Platinum Level Worksite by the American Heart Association, for workplace programs that promote physical and emotional wellness.

“Bertha Henry’s leadership team describes her management style as inspiring, inclusive, empowering and compassionate,” added Assistant County Administrator Monica Cepero. “She believes that mentoring is key to developing and maintaining talent and has herself mentored many successful young professionals.” Examples of employee-centric programs include her signature “Lunch with Bertha” feedback sessions, which bring together small groups of employees interested in sharing concerns and exchanging ideas.

“I am humbly honored,” says Henry, “but I would not be able to accomplish these many goals without the support of my Administrative team, the 6,000 Broward County employees, and most importantly, the Broward County Commission.”

“We congratulate the recipients of our Professional Awards,” says ICMA Executive Director Marc Ott. “The men and women recognized this year set the standard for innovation, effectiveness, and creativity in the cities, towns, counties, and academic institutions they lead. We thank them for their commitment to improving the lives of the constituents they serve every day.”

Mayor Sharief announced the award at the June 13, 2017 meeting of the Broward County Commission. Ms. Henry will be formally honored during a Celebration of Service to the Profession as part of ICMA’s 102nd Annual Conference, in San Antonio/Bexar County, Texas on October 25, 2017, and will be highlighted in a commemorative booklet posted on icma.org and published in a future issue of PM magazine.

From “seagrass to sawgrass,” Broward County is a 1,323-square mile metropolitan community of 31 diverse municipalities along Florida’s southern peninsula, between Miami-Dade and Palm Beach counties, bordered on the east by 23 miles of Blue Wave beaches, and on the west by a vast ecosystem, the Everglades. With 1.9 million residents, it is the nation’s 17th largest and Florida’s second largest county. Tourism is a key economic driver that brings more than 13.6 million international and domestic visitors here each year.