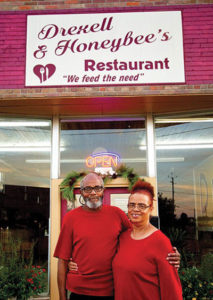 Lisa Thomas-McMillan and her husband, Freddie, take on the hunger problem with a new restaurant concept that they call a pay-as-you-can eatery.

BREWTON, AL (BlackNews.com) — Lisa Thomas-McMillan and her husband Freddie have just opened a new type of restaurant in Escambia County that feeds people whether they have any money or not. It was 1995 and Lisa was a cashier at a local Walmart. One of her customers had no money to buy the groceries she needed. After speaking with the lady for a few minutes, she realized there were many others who were in the same boat.

Right then, Lisa began a ministry that would eventually become the Drexel & Honeybee’s Restaurant.

The couple went on to feed thousands of hungry people over the years from veterans to college students.

The couple visited the local campus of Jefferson Davis Community College. There Lisa noticed two students gathering up change to buy food from vending machines. That’s when she realized that there were probably lots of hungry college students on campus. It wasn’t long till they were serving delicious Sunday-style meals for students. All they asked in return? Donations from those who could give.

For the next 10 years, they used community donations to stock the kitchen’s pantry, often supplementing this with purchases paid for out of their own pockets. After feeding people throughout the year including Thanksgiving and Christmas, the couple knew they wanted to do more.

Over the years, Lisa has done just about everything imaginable in order to raise money for food and bring awareness to the hunger problem in America. She has authored a book called Living Fulfilled: The Infectious Joy of Serving Others that describes her journey thus far. It’s for sale on Amazon. Then in 2005, she did a Walk to Washington to gain support.

She says that it was while she was serving students at the college that she first had the idea to build a restaurant.

She had a dream but no money. “But, God always provides,” she said.

“The thing about hunger is, you don’t know who’s going hungry. You can’t see it on their face. You don’t know what’s in someone’s cabinet, or more importantly, what’s not. If you’re down and out and struggling, coming to a decent place and enjoying a hot meal can lift your spirit,” Lisa adds.

Lisa heard about rock star Jon Bon Jovi’s Soul Kitchen in New Jersey. This place allows people to donate or volunteer in order to pay for their meals.

This gave her a solid blue print for the Brewton restaurant.

“I went on his website to see what I could learn, because I knew we could do it,” Lisa says.

In 2016, Lisa found the building on Lee Street. Her husband said that they would have to pay for the building (which was $45,000) before doing renovations. She recalls that it was a struggle but with a $20,000 grant from the Brewton City Council and some money of their own they were finally able to pay for the building, then complete the necessary renovations. Today, they prepare delicious meals each day including meatloaf, fried chicken, BBQ ribs, along with fresh vegetables, rice, macaroni and cheese and

many more. And there are no prices posted anywhere.

Guests dine for free, leaving a donation in a box by the door when they leave.

“If you can donate, then please do. Otherwise, the meal is free,” Lisa says. “We don’t worry about that. Freddie says we’re going to keep this restaurant going. We’re going to feed people. Period.”

Lisa says that they’ve only run out of food one time in all the years. The couple has created a non-profit,

She concludes by saying, “There is a hunger need in every community. Between March and September, we provided 12,200 meals. That’s a lot of food. The hours are long; the cost is high, but it’s a calling for us. The notes

people leave in our box tell us how much of a need there is.”

Drexel & Honeybee’s is open Tuesday through Friday from 11 a.m. until 1 p.m. and is located at 109 Lee St., Brewton, Alabama