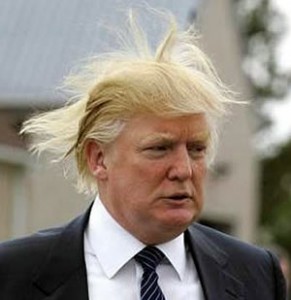 The mere sight of Mitt Romney tends to make my eyes roll, my blood pressure boil, my skin crawl, and the crack of my butt itch, but lately he has ignited a level of rage inside of me that I never knew that I had. I have grinded my teeth nearly down into stumps because for months now, all anyone has heard is Romney and his surrogates talk about how President Obama does not understand what the country needs. Now just in case some of you out there are living somewhere in La La Land, that is code language for “He is half Black, and there is just no way that the darker side of him could possibly know or understand anything about business or the psychology of it.”

And for the love of a duck I would really like to be able to explain the strange and perverse relationship between Mitt Romney and Donald Trump, but honestly I can’t. Seriously, the only political relevance that Donald Trump actually has is the fact that he has the ability to pull in all of the crazy, back woods living, no teeth having, shot gun toting, rednecks in the United States.

Now unless I have missed something, that constituency has never been a majority, nor will it ever be, so I would think that it would be better for any politician who is seriously running for public office to leave all of those mutants of modern day evolution underneath the rocks that Trump has rallied them to come out from.

Some people have to literally run into a concrete wall a thousand times before they actually get a message. In the case of Donald Trump, he has to not only run into the wall, but he has to be slapped in the face, kicked in the chins, and run over by an 18 Wheeler, and he still doesn’t get it.

Now any normal person with one eighth of a brain would have dropped all of this Birther nonsense when the president shut them down by releasing his long version of his birth certificate, and then making a minced meat sandwich out of them at the 2011 National Correspondent’s Dinner, but not Trump. He has managed to revive and give new life to the Birther movement.

It absolutely amazes me as to how Trump and all of the mental rejects that actually follow him and all of his insanity, can constantly spew out the most hateful and vile language known to God and man, therefore evoking those who are the absolute @worst that America has to offer, and still stand before the American people and proclaim that they love America, and that the President does not. I have tried to comprehend in just about every way that I can to try to make sense out of Donald Trump and the nonsense that he engages in, but I have discovered that there is no sense to be made out of Trump’s nonsense.

My simple wish is that American’s will lift off the veil of deception, and see the truth for what it actually is, and that simple truth is that Mitt Romney has to partner up with an imbecile like Donald Trump, and he has to seek the approvals of the deep hearted racist, and all of the other misfits of society, because he hopes that all of us will continue to be stupid and ignorant enough to pay more attention to all of the nonsense, and less attention to the fact that her we are in June of a presidential election year, and Mitt Romney, the Republican nominee has as of yet to tell anyone what his plans are for America. He can criticize the president and all that he has done, but where is Mitt Romney’s plan for America? We will never hear Romney’s plan for America, because the truth is he has nothing to offer America.

Get energized people, open your eyes and look around, we are in trouble, but nothing will begin to compare to the trouble that we will all be in if we stay home on election day and allow Mitt Romney and the Republicans to take the White House. If you are not registered to vote, get out and do it now.

If you have questions or comments about anything that you read in Sensible Sue’s Rhetoric, please send them to sensiblesuesrhetoric@gmail.com.

Congresswoman Ilhan Omar addressed a crowd of black women leaders from around the country in front of the Capitol building Tuesday at a rally in her defense, following a series of right-wing attacks against her. […]

You can’t erase love, but you can remove hate

You can’t erase love, but you can remove hate

The former manager of Donald Trump’s presidential campaign, Paul Manafort, is to face charges related to an inquiry into alleged Russian election meddling, US media report. He was seen arriving at an FBI office in […]