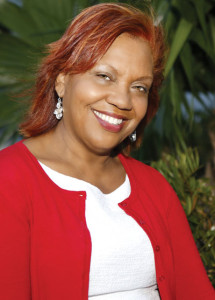 Donna Guthrie is not a quitter she’s a fighter

Donna Guthrie is no stranger to working for others. As the President of the Melrose Park Homeowners Association for more than a decade, a widowed mother of adult children and manager at a fortune 500 company, Guthrie has a proven track record of handling numerous matters successfully.

“Donna is a force to be reckoned with when it comes to fighting for the community” says Linda Dawkins, who over many years watch Guthrie go after and shut down drug houses and work to help hundreds of young people be productive adults.  Linda has watched Guthrie bring the community together on issues of importance.

When asked about her first attempt at gaining a seat on the Fort Lauderdale City Commission without hesitation Donna replied, “I listen to the wrong people and thought they knew the community. I should have done a better job at listening to both sides of the entire community.”

She admits that she can be feisty and is not afraid of a fight.

“When I came to this country, I was a fighter and I’ve been fighting every since for people who society seem to have gotten.”

Guthrie is not shy about telling others why she is running.  At a recent political forum, she told the crowd “now, more than ever before, high morals, ethical standards and strong leadership is needed at all levels of government….whether it’s in the White House or the city commission, people deserve a leader they can trust and someone who is unbossed and unbought.”

Guthrie was referring to her sitting commissioner opponent who many long-time NW Fort Lauderdale residents feel have turned his back on the community since being elected.

Guthrie is a Fort Lauderdale resident for more than 25 years.  She worked together with now deceased friends Shirley Small and former commissioner Carlton Moore to make the largest neighborhood association in the District 3 a desirable place to live.

Guthrie often says that District 3 has more immediate needs than the rest of the City of Fort Lauderdale and she’s right.  Her vocal leadership is the reason the district now has code enforcement on Saturdays and a provision in the City code for choosing local small businesses for contracting opportunities.

The Westside Gazette endorses Guthrie as a leader who will make a difference for District 3 and one who if you disagree with is willing to listen and not become vindictive.  Don’t forget on January 16, 2018 vote for Guthrie

From Selma to Montgomery – Martyrs of the March

From Selma to Montgomery – Martyrs of the March
[…]

In a joint effort to get students involved with the Children Services Council’s 2019 Broward AWARE! Protecting OUR Children campaign: Growing the Voices of Our Future, the Westside Gazette will engage youth in a photovoice (photojournalism) project.  The youth will tell their stories through the written word and through the lens of cameras they will operate as  photojournalists focusing on but not limited to the Broward AWARE campaign.