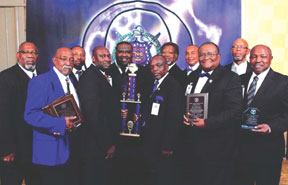 The Eta Nu Chapter of Omega Psi Phi Fraternity, Inc. dominated the other 30 chapters from Key West to Pensacola, capturing multiple awards at the Florida Statewide Organization meeting which convened in Panama City, Fla. on Sept. 11-14- 2014 at the Wyndham Bay Point Resort. A contingent of brothers led by three-term Basileus Antonio Brihm traveled by bus to Panama City with confident assurance and great expectations, completely cognizant of the tremendous work that the brothers had invested in the fraternity’s mandated programs and the community initiatives fundamental to Eta Nu’s social action committee. Of the eight major awards in the large chapter category (51 members or more), Eta Nu was awarded first place in seven: Chapter of the Year, Social Action Chapter of the Year, Artifacts and Memorabilia, Scholarship, Talent Hunt, Citizen of the Year and The Founders Award. And though we didn’t win Omega Man of the Year, Brother Melvin Davis, HN’s Omega Man of the Year and our unparalleled Social Action chair, was undoubtedly de-serving of this most auspicious award.

Davis states with great pride “Working for Omega is an honor and privilege, knowing that eight thoroughly immersed will always prevail.” For much of the new millennium, Eta Nu’s success as one of the premier chapters in the Omega Psi Phi Fraternity, Inc. has been profoundly evident, having won the state and district afore-mentioned awards on numerous occasions.

A contingent of Eta Nu brothers numbering in the thirties  traveled to Charlotte, NC to attend the 83rd Grand Conclave of the Omega Psi Phi Fraternity, Inc. Led by Basileus Terry Bruce Brown,  for the very first time since the chapter’s chartering in 1969, Eta Nu was named National Social Action Chapter of the Year, an honor, though long in coming, was accepted on behalf of the chapter and more specifically chapter and 7th District Social Action Chair Brother Melvin Davis by Region II Representative Lennox George with palpable, heartfelt humility. Having won the award numerous times on the state and district level, winning nationally places the chapter in a different stratosphere fraternally. You see, Social Action, one of Omega’s nationally mandated programs, has been a significant, meaningful and effective tool in Eta Nu’s impact on the citizens of Pompano Beach and Broward County. Programs like the Adoption Party in collaboration with Child Net, Diabetes and Sickle Cell Foundations, Christmas and Thanksgiving Basket giveaways, Voter Registration/Education initiative, Feeding the Homeless, Breast Cancer Awareness and Youth Mentoring/STEM Empowerment programs – among others – have propelled its community successes. […]