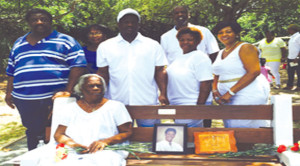 Friends and family of Joseph L. Williams, affectionately called Stu, remember him as a kind, loving young man. “He was never afraid of anything,” said family friend Denise Washington. “He never wanted his epilepsy to hold him back from enjoying life.” As a child, Stu attended Carter G. Woodson Elementary School, Lloyd Estates Elementary, and Rickards Middle School. On the day of his graduation from Northeast High School, he suffered an epileptic seizure and drowned at Hugh Taylor Birch State Park.

Denise was only 11-years-old when she accompanied Stu on the fateful paddleboat ride in 1972. She grew up across the street from the family and called Stu her big brother. “I didn’t know how to swim. To this day, I don’t know how I got out,” Denise said. Sadly, the inability to swim is all too common in Black communities across generations.

A 2014 study by the Centers for Disease Control and Prevention showed that Black children ages five to 19 drown in swimming pools more than five times the rate of white children.

Neither Denise nor any of Stu’s family members had been back to the park before last year. Last spring, his younger sister Theresa Elliott visited the park for the first time since Stu’s accident. As she neared the lake, she stopped and choked up. “This is where my brother died,” she told her friend. She stopped to remember him and all the good times they’d shared at the park as a family. As she and her friend continued a-round the trail, she noticed different memorials for other individuals. She talked to her sister, Beverly Martin, and Addie Owens, president of the Northwest Federated Women’s Club and the three began planning a memorial dedication and service right away.

Their hard work came into fruition on Aug. 15, two days before Stu’s 61st birthday. With the help of State Park Di-rector Dave Darth, they were able to secure a bench in his ho-nor. Approximately 50 family members and friends gathered for the brief service, including his mother, Reather Martin; sisters, Beverly Martin, Theresa M. Elliott, and Pamela Martin; and brothers, Manuel Martin, Richard Martin, and Darryl Martin. Attendees shared brief reflections about Stu in front of a small podium, his senior class photos, and a wooden plaque of the diploma he never received.

“I wanted this to bring us all a sense of closure,” Theresa said. We have a lot of good memories here. This is the park where we spent our summer vacations and had family picnics. All of that stopped when he passed. I hope coming here and having the bench can help us continue to heal. His legacy will live on past all of us in a very permanent way.”

Though Stu’s life ended long ago, he made Broward County history by becoming the first Black man memorialized in the state park. Paradoxically, Fort Lauderdale is also home to the International Swimming Hall of Fame (ISWHF). In 2007, the ISWHF published Black Splash: A History of African American Swimming by swimming instructor and historian Lee Pitts. “The African American experience of exclusion from the opportunity to swim in Fort Lauderdale was commonplace throughout America in the first half of the 20th century,” he wrote, “leading to what has been described as a cultural disconnect between the Black community and swimming.” Without this exclusion and disconnect, perhaps Stu could have made it to his graduation ceremony.

Adorned with a small metal plaque commemorating Stu’s life, the bench sits a few yards away from the lake. Hopefully Stu’s gentle, caring spirit will comfort family members who come to remember him, kayakers who sit for a rest after a long day, or other families seeking peace on a hot summer day.

Kayla C. Elliott is a PhD student at Florida Atlantic University. Her background is in higher education, nonprofit management, fund-raising, and philanthropy. She is a proud alumna of Fisk University and a member of Delta Sigma Theta Sorority, Incorporated.