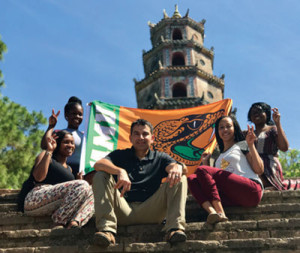 This year, the Florida A&M University Army ROTC had the honor of becoming a partner in the United States of America Vietnam War Commemoration, which also coincides with the Secretary of Defense’s commemoration of the 50th anniversary of the Vietnam War.

After learning about the battle of Ia Drang in the Vietnam War, four FAMU students, alongside Army ROTC professor of military science LTC Edwin Escobar, traveled nearly 10,000 miles to Vietnam this spring to participate in unique learning and engagement opportunities offered through the partnership.

The group of students represented a grateful nation, as they took time to thank and honor Vietnam Veterans and their families, including the service of FAMU alumni, throughout the trip.

Among the students’ activities, while abroad, were staff rides which enable students to go to a noteworthy battle-ground and get an intelligent and hands-on experience that spotlights the strategies and techniques of opposing forces while studying the mindset of the soldiers who battled in the fight.  Staff rides were built into the Army ROTC educational modules in 2015, with LTC Escobar leading a group of students to Normandy, France where students studied the battle of D-Day.

This year, the students chose Vietnam. The Vietnam War was a long and costly armed conflict that pitted the communist regime of North Vietnam and its southern allies, known as the Viet Cong, against South Vietnam and its principal ally, the United States.

The war ended with the withdrawal of U.S. forces in 1973 and the unification of Vietnam under Communist control two years later. More than three million people, including 58,000 Americans, were killed in the conflict.

The students traveled to three historic capitals: Ho Chi Minh City in South Vietnam, Hue in Central Vietnam and Hanoi in North Vietnam. Students enjoyed the beauty of the land and rich history, studying the impact of the Vietnam War, and engulfing into the vast culture.

Walking the grounds where the war took place, the main objectives of the trip were to develop leaders who think tactically to prepare for difficult and vigorous circumstances, build strong coalitions across cultures and generations, and prepare the next generation of trailblazers.

FAMU student BreAnn Baskett explained that she enjoyed participating in the everyday activities of the local Vietnamese people, as she “learned how to make rice paper, create lacquer ware, witnessed the local religion, and ate the local food.”

“Everyone deserves an experience like the one I had in Vietnam,” Baskett said.

In addition to learning about the significant battles during the Vietnam War, students were able to visit sites such as the Cu Chi tunnels, the War Remnants Museum, and the Vietnam Military History Museum, which played a vital role in visualizing topics investigated during their classroom studies.

“Vietnam was an amazing sight to see,” said graduating senior Imani Strong. “You hear about developing countries but to see it is remarkable. Being given a chance to go there is a once in a lifetime opportunity. It is still unbelievable how I was standing on the very historic battlegrounds that were once destroyed in the Vietnam War.”