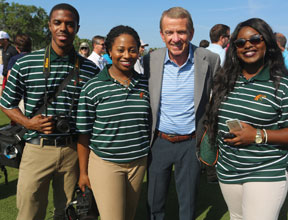 PONTE VEDRA BEACH, FL — Just a few weeks ago, three FAMU students were afforded the unique opportunity of a lifetime. They were special invitees to cover one of the media days and practice rounds at The Players at TPC at Sawgrass. Widely regarded as the “fifth major” on the PGA Tour, The Players annually has one of the best fields in golf. This year was no different as top golfers Rory McIllroy, Jordan Spieth, Jason Day and Ricky Fowler were in the field.

The FAMU students were rewarded with the opportunity by PGA Tour Media Relations on a special invite afforded to FAMU Athletics. All three students were interns in FAMU Athletics for the 2015-16 school year and were rewarded for their professionalism and drive during the year. FAMU Sports Information Director Vaughn Wilson escorted the students to the tournament. Wilson covered the PGA Tour for nine years as the sports editor of the Capital Outlook newspaper and his work was published in Black newspapers in Florida and across the nation via the National Newspaper Publishers Association (NNPA).

“When we formed our internship partnership with our journalism and business schools, we committed to Dean Ann Kimbrough and Dean Shawnta Friday-Stroud that we would expose these students to the highest level of professionalism and give them valuable experiences to prepare them for their careers,” Overton said. “We are proud of the fact that our students got an opportunity to experience professional sports media at its highest level.”

The day began with a tour of what is considered one of the most technologically advanced media facilities in the world.

“When we walked into the media center at TPC at Sawgrass, it was like we stepped into the future,” Culler said. “I would never have imagined that media would have the luxury of a dedicated press room, fully multimedia-capable press auditorium, gourmet cafeteria and virtually anything they could imagine to facilitate them providing coverage of The Players.”

After the tour of the media center, the interns were escorted to the “First Timers” press conference. That press conference was for players who were playing in the tournament for the first time. The interns researched the players in advance and had selected Tallahassee resident Hudson Swafford as one of their interview targets. Swafford noticed the Rattler icon on the polo shirts of the interns and flashed a smile as he recognized that the students were hometown media.  Swafford was the first of several interviews the interns had the opportunity to do with current PGA golfers.

As the students made their rounds, they ran into Harold Varner III. While talking to Varner, the unimaginable happened. PGA Tour Commissioner Tim Finchem, who was making his rounds presenting each new player with a pair of Tiffany cufflinks, was intrigued by the only three media persons dressed in uniform.  Once he was informed that the media crew was in fact the students from FAMU, Finchem took out time to chat with and encourage the students.  For a few moments, because of the way they carried themselves, the opportunity that journalism students across the country would give anything for was right before them. A conversation with one of the most powerful men in all of professional sports.  To top things off, Finchem posed for photos with the students.

Nearing the end of the trip, Wilson suggested that no trip to TPC Sawgrass was complete without a visit to the most famous hole in golf – the Island Green at No. 17.  Marveling at the beauty of the stadium course, the students were not only intrigued at the players and caddies playing the hole, but also the technology the PGA Tour had dedicated to each area.

There was a free high-speed wireless network on the whole course, cell phone repeater towers, multiple video boards, wireless camera receivers and on the 17th hole, a remote camera similar to the ones used in the NFL to capture the huddle.

“I never imagined, watching golf on television, that this much technology was required for what we see.  It is as if they make a whole city right there on the golf course,” said Weddington.

Suddenly a big crowd drew near. It was a clear indication that one of the stars of the PGA Tour was approaching. Wearing his purple Under Armour polo shirt, Spieth approached to much fanfare. Taking his smooth swing. He landed his shot just a few feet away from the center pin placement on the island green. After signing autographs for some kids from the First Tee of Jacksonville, he was on his way.

“The whole experience was beyond incredible. Being exposed to this kind of technology drives me.  It generated another thought pattern of thinking that I will adopt as I more forward to a career in journalism,” Jones said. “I couldn’t have asked for a better opportunity than being exposed to professionals in the field I am pursuing.”

The final stop of the experience took the students back to the media facility for a conversation with ESPN golf analyst Michael Collins. Collins took about 30 minutes with the students to detail his journey. Starting as a standup comedian, Collins met some golfers and befriended them. From there they would request him. His break came as he was hired by Sirius-XM to provide on-course reporting. Finally, ESPN hired him away to do segments for its golf coverage. Collins told the interns, “This isn’t work. I get paid to follow a sport I love and to develop new ways to report it. Sometimes I just pinch myself.”

Barner has built a reputation in Broward County as a trial attorney in both civil and criminal courtrooms, and her dedication to the practice of law and the respect with which she treats her colleagues is reflected by her rating of AV Preeminent by Martindale-Hubbell (a rating bestowed on fewer than 7 percent of attorneys nationwide).

Florence was born and raised in South Florida and has lived here all of her life. As a law student at the University of Florida, she got “behind the scenes” insight into the daily life and responsibilities of a Judge when she worked and learned under the tutelage of both Judge Jennifer D. Bailey and Judge Ohlman. Florence was also part of a team that aided indigent clients in the pursuit of post-conviction relief based on trial court irregularities in sentencing.

Alfreda D. Coward is a partner of Coward & Coward, P.A., a law firm in Ft. Lauderdale, Florida. She practices with her sister, Kimberly D. Coward, primarily representing indigent clients in the areas of criminal law and family law. During her fifteen years as an attorney, Ms. Coward has had well over 100 jury trials. Some of these trials were recorded and aired on Court TV, MSNBC and NBC Dateline.

In addition to Coward & Coward, Coward currently serves as the co-founder and executive director of One Voice Children’s Law Center. One Voice Children’s Law Center is a non-profit organization that represents kids that have pending matters in the dependency, delinquency and/or educational systems. She also served as an adjunct professor at FIU College of Law teaching educational advocacy. Coward is a graduate of the University of Florida, where she received her Juris Doctorate degree in 1995 and her Bachelor of Science Degree in Psychology in 1992. Coward is a member of The Florida Bar. She is also admitted to practice in the United States District Courts for the Northern, Middle and Southern Districts of Florida.

Judge Kal Evans, 38, of Fort Lauderdale, served as Assistant State Attorney for the 17th Judicial Circuit since 2003. He received his bachelor’s degree from the University of Michigan and his law degree from Nova Southeastern University. Evans filled the vacancy created by the resignation of Judge Joseph Murphy. On Aug. 4, 2014 Evans was appointed by Governor Rick Scott. As an assistant state attorney Evans was best known for successfully prosecuting Matthew Bent in 2012 for his part for attacking and burning a child.

These careers are examples of dedication to improving the ills that affect our society in a spirit of fairness and practicality.

Today, “The time is right to do what’s right” again. The significant gains of the civil rights movement are won by people and their votes.

On Aug. 30, 2016, it will be time to decide whether to stay home, not to make arrangements to find some time off in our schedule or to come to the realization that many sacrificed their lives to exercise their right to vote. For minorities, not participating in the voting process is perpetuating decades of civil non engagement that will translate in more social, economic and judicial hardships and in never having adequate representation in court.

Hence, go to the nearest precinct pay a small price to bringing about change in our community and the court system. This is not the time to squander votes and to be lethargic. If we want better representation in court, we must act, building on the legacy and sacrifice of Martin Luther King Jr. So we have no excuses not to exercise our duty as citizens to empower our voices in the court system!

In Memoriam: John Singleton Dead at 51

It’s not just about that flag