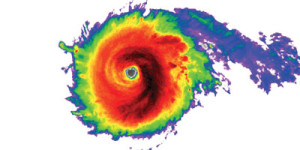 While Irma’s exact path is uncertain, the hurricane could make landfall in Florida by the

end of the week. Georgia and the Carolinas may also be impacted with wind and rain.

“Anybody in Florida should be preparing for a hurricane,” Brian Thompson, a meteorologist

the state’s 67 counties on Monday afternoon.

“Hurricane Irma is a major and life-threatening storm and Florida must be prepared,” Scott said in a statement. “I have continued to be briefed by the Florida Division of Emergency Management on Hurricane Irma and current forecast models have Florida in Irma’s path – potentially impacting millions of Floridians. Today, given these forecasts and the intensity of

this storm, I have declared a state of emergency for every county in Florida to make certain that state, federal and local governments are able to work together and make sure resources are dispersed to local communities as we get prepared for this storm.”

Tropical storm force winds may be possible as early as Friday night 8 p.m., to Saturday morning.

Floridians have already begun clearing out shelves of water and non-perishable foods, as many have documented on social media.

These huge, churning storms can spell disaster. Check out the do’s and dont’s of hurricane safety.

Hurricanes can wreak havoc in many ways, with lashing winds, torrential rains, and inundating storm surges. Here are some tips on how to survive the fury of a hurricane.