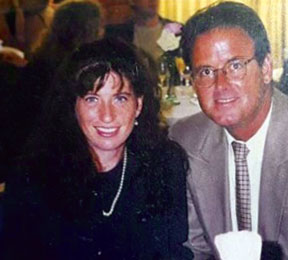 Michelle Mishcon, 53, and her husband John Stevens III, 59, were killed by Harrouff in the “inexplicable” attack, according to investigators.           (Martin County Sheriff’s Office)

A Florida man thought to be on hallucinogenic drugs fatally stabbed a couple, bit off part of the husband’s face and wounded a would-be rescuer, police said.

Harrouff was making grunting, growling “animal-like noises” at the scene and later gave investigators a false name, Snyder said. He declined to speculate ahead of test results but noted the gruesome slaying may be linked to synthetic drugs marketed as cheap substitutes for other stimulants.

“We know in our business that people on flakka or bath salts will do this type of behavior where they attack their victim and do the biting and remove pieces of flesh in the biting,” Snyder said at a news conference Tuesday morning.

Police said Harrouff, 19, was making “animal-like noises” and ripping off one of his victim’s faces with his teeth when they arrived at the victim’s home Monday night.

Investigators said John Stevens III, 59, and his wife Michelle Mishcon, 53, died at their home in the affluent Palm Beach County town, WPTV re-ported. Snyder said a neighbor who tried to stop the stabbing rampage and dialed 9-1-1 was hospitalized but expected to sur-vive after suffering “substantial trauma.”

Snyder said Harrouff didn’t know the couple before the 10:30 p.m. attack, which he called “completely unprovoked and random,” the Miami Herald reported. Investigators said Harrouff used a switch-blade and several “weapons of opportunity” in the couple’s garage.

“There was an enormous a-mount of violence in that garage,” Snyder said. He noted deputies found the woman’s body in the garage. Investigators believe Stevens fought for his life before Harrouff killed him and started biting off chunks of

Harrouff, who was in town with some of his FSU fraternity brothers, stormed off from dinner with his parents at a nearby restaurant 45 minutes before the attack, according to the sheriff. His parents called the police after he became angry, possibly over slow service, and walked out of a local sports bar named Duffy’s.

The first deputy who arrived at the SE Kokomo Lane home used her stun gun on Harrouff to try to get him off Stevens’ bloody body, investigators said. Yet the Taser didn’t faze Harrouff, and neither did bites from a police dog who arrived with two more deputies, according to Snyder.

“The suspect in this case was abnormally strong,” Snyder said.

Medical staff at a hospital later sedated Harrouff. Blood tests showed the former high school football player and wrestler had not taken meth-amphetamine, cocaine, heroin or other common drugs. Scans for flakka or bath salts, which are part of a class of drugs alarmed health officials refer to as “new psychoactive substances,” will take longer to complete.

Doug Meadows first identified his sister and his brother-in-law as the deceased victims in an interview with The Palm Beach Post early Tuesday. The couple often hosted friends in the garage of their Jupiter River Estates home.

They placed couches and a TV in the garage and usually kept its door open, Maddox said.

“It’s just beyond me why that would happen,” Maddox said. “The guy must be crazed.”

The case immediately prompted comparisons with the “Miami face-eater” case of May 2012, when police fatally shot a naked man who they said had been trying to chew off another man’s face. Yet the suspect in that case, 31-year-old Rudy Eugene, had only marijuana in his system, and his victim didn’t die.