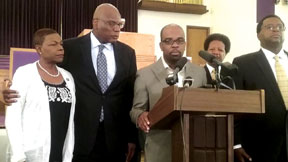 Sen. Audrey Gibson is consoled by Rev. R.B. Holmes during a press conference last week, where members of the clergy called for the ouster of former Senator Frank Artiles. (Photo by St. Clair Murraine)

Up to the minute that Sen. Frank Artiles decided to resign almost a week ago, he seemed ready to put up a fight in spite of national outcry over his profaned and racially laced attack on Sen. Audrey Gibson.

But while the racial scars from Artiles’ tirade may linger, many are calling his decision to leave the Florida Senate “the right thing.”

Gibson, a Jacksonville senator, had little to say following Artiles’ resignation and apology.

“This has been an ordeal that no one should have to endure,” Gibson said in a statement. “I wish him well in all of his endeavors”

Later in response to a request from the Capital Outlook for comment, she said, “I thank everyone for their outpouring of support.”

Tampa senator Darryl Rouson was just as succinct in his reaction to the resignation of the senator from Miami.

“Artiles did the only honor-able thing left and that was to spare the Senate of more hard feelings,” Rouson said. “It never should have happened in the first place. He did the right thing by resigning.”

Artiles’ attack on Gibson followed some casual conversation while members of the Senate  were socializing at the Governor’s Club. The conversation between Artiles and Gibson evolved into what has become a well-documented outburst by Artiles.

By Gibson’s account of what happened at the Governor’s Club, Artiles began by letting her know he didn’t like the position that she’d taken on some of his bills.

He’d also expressed his dis-satisfaction a week earlier in the Senate, she said.

Artiles told her, “Don’t ask me stupid questions about my bills because I was elected just like you and you don’t get to tell me what to do,” Gibson said.

During his public outburst, he referred to her by several denigrating names, including these of the N-word. He also lashed out at Fort Lauderdale senator Perry Thurston and senate president Joe Negron (R-Stewart), using profane language.

With that, Artiles’ attack “escalated to a point of no return,” Thurston said at a press conference held by members of Tallahassee clergy to call for Artiles’ resignation.

“It was horrific,” Gibson said at the gathering of ministers. “No one has ever addressed me in such a manner ever in my entire life and I’ve never heard such nasty comments about leadership in my entire life.”

Two days after the ministers vehemently called for Artiles’ ouster, Rev. R.B. Holmes, who led the protest, asked that the senator be forgiven.

“I sincerely want to com-mend Senator Frank Artiles for doing the right thing by resigning from the Florida Senate,” Holmes said in a statement. “I know this was a difficult decision for him and his family.

“I am thankful that he followed his heart and put the great state of Florida first.  We must all forgive him and pray that God will bless him with a great future.”

Just days before he announced his resignation, Artiles hired Tallahassee attorney Steven Andrew, who contended that his client’s comments were protected under the First Amendment.

At the same time the Senate was in the process of considering removal of Artiles from office under pressure from protesters, including members of the Florida legislature Black caucus.

But the effort to remove Artiles came to a halt when he announced his resignation.

“I apologize; I am so sorry for the words and the tone that I used with you regretfully