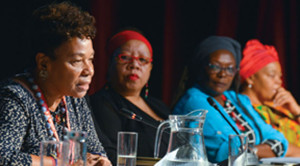 I first attended the International AIDS Conference in 2002. I traveled to Barcelona at the height of the HIV/AIDS epidemic in the African-American community with a delegation of other journalists of color from around the world, excited to cover the global gathering and share, learn and find common ground with others from Africa and our diaspora.

But to my surprise, most of the people I met that year had no idea that HIV/AIDS was still a concern in the United States. When I mentioned that I was working on a piece about AIDS in the African-American community, another journalist asked, “Do you mean AIDS in Africa, the issue Bono’s working on?” Most disappointingly several non-American people of African descent in our group made comments to the effect, “Lucky for you, AIDS is not a problem in your country anymore.” We had been “disappeared,” made invisible, excluded from the conversation, erased.

That was far from the truth. In fact, just as the disease had become “manageable” in the United States with the advent of anti-retroviral medication, it grabbed hold of the Black community in America and hasn’t let go. Beginning at the end of 1996, just as many of those most affected—primarily white gay men—were coming back from the dead thanks to life-saving treatment, Blacks began to account for a larger proportion of AIDS cases than whites (41 percent) for the first time since the start of the epidemic. Then (and now), in pockets of America—in the South and in communities of Black gay and bisexual men—African Americans were acquiring HIV at rates that rivaled and surpassed many of the countries on the continent. AIDS had also just become the leading cause of death among American Black women of childbearing age.

Even as the epidemic has changed over the past 14 years and six international AIDS conferences—mainly for the better—each time I have attended these large-scale events the nagging question resurfaces: Why the disconnect between people of African descent who care deeply about the issue of HIV/AIDS and have so much to learn and share? The vast majority of people living with the virus around the world are Black, so why are we creating separate tables rather than all sitting together?

Yesterday morning, Marsha Martin, a long-time heroine in the AIDS struggle, answered the question with action. Along with her co-chair, Senegalese-born scientist Amadou Diagne, she convened the first meeting of the Global Network of Black People Working in HIV (GNBPWH) with over a hundred Black bodies in the room. The goal?

o move from silos to solidarity when it comes to finding tools, technologies and targets best suited to Black people in order to end the epidemic.

South African researcher Dr. Olive Shisana, says she first realized the extent of HIV in Black communities in the United States while working as a health statistitian in Washington, D.C. in the late 1980s. “I saw so many death certificates come across my desk,” said Dr. Shisana, who returned home in 1991 and later worked hand in hand with Nelson Mandela on the AIDS issue. “That was an indication that something wasn’t right.”

Dr. Shisana, co-chair of AIDS 2016, described the goal of GNBPWH simply and elegantly. Looking at the faces in the room, she said, “This is not about sharing ideas and going back to the comfort of our own countries, but establishing a bond like an umbilical chord tied between mother and child.”

As we talked and listened to each other yesterday morning, one point became crystal clear: People of African descent, on both sides of the ocean, have long been leaders in the 35-year epidemic, and often without credit. In the room: A prominent U.S. legistator, former white House AIDS “czar,” a former United States Global AIDS coordinator, several members of the Presidents Advisory Council on AIDS (past and present), a high-ranking National Institutes of Health official, and several directors of well-respected NGOs.

Congresswoman Barbara Lee, who has authored or co-authored every major piece of HIV/AIDS legislation, pointed out that, quiet as it’s kept, Black American legislators spearheaded both The Global Fund to Fight AIDS, Tuberculosis and Malaria and PEPFAR—which changed the course of the epidemic worldwide. In 2010, members of the Congressional Black Caucus were also instrumental in lifting the discriminatory U.S. travel ban that had kept people with HIV from entering the country for 22 years.

“It was African Americans who led the way, but don’t get recognized for it,” says Lee, also naming representatives Eddie Bernice Johnson, Maxine Waters and Donna Christensen as her CBC allies. “We have the documentation because we don’t want history to be revised.”

Though numerous challenges remain, sub-Saharan Africa has seen huge HIV successes, again, largely driven by Black leaders. Deaths have dropped and growing numbers of PLWHA have gained access to treatment. Of the 17 million people on ARVs worldwide, 10 million are in Eastern and Southern Africa. “I must boast and say my region has really moved ahead,” says Sheila Dinotshe Tlou, director of the UNAIDS regional support team for Eastern and Southern Africa. We cannot sit on our laurels, but we have seen a real saving of lives.”

African Americans have much to learn from our brothers and sisters on the continent. Solutions are not “one size fits all,” and we have seen too often that we don’t fit comfortably into the prevention and treatment models left over from an earlier era of the epidemic. To be blunt, they don’t work. As in Africa, the African American AIDS epidemic has hit communities that are least able to fight back—poor, disenfranchised, riddled with stigma and discriminatory laws.

“The best practices in Africa can be translated well to the U.S.,” says Tlou. “We can work together with the Diaspora to help each other. We don’t need to invent new ways. “

In all parts of the Diaspora, it’s critical to understand that HIV/AIDS is more than just a disease; it’s a human rights and social justice issue. Dawn Cavanagh, director of the Coalition of African Lesbians, brought Kimberle Crenshaw and her theory of intersectionality into the room, to help tie our thoughts and feelings together and remind us how oppression overlaps. “As people of African descent, we need to be fully who are we and not allow others to define us and disconnect us,” said Cavanagh. “Solidarity is about friendship and kinship. Keeping in mind that an injury to one is an injury to all.”

Linda Villarosa runs the journalism program at The City College of New York in Harlem. She has covered the biennial International AIDS Conference since 2002.

In an historical move, a white Cincinnati, Ohio campus police officer was indicted for murder Wednesday afternoon in the shooting death of a local Black man on July 19. […]

As Medicare and Medicaid turn 50 this week, the nation takes a look at the impact of two of the most significant government programs ever launched. […]