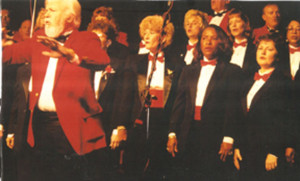 History: In May of 1959, a Broward County Principal, Russell Rowe, accepted an “invitation from the Associate Superintendent of Broward County Schools to sing at the end of the year Administrator’s Banquet at the Reef Restaurant in Fort Lauderdale, Florida. “Russ” as he is fondly called sang and played “Yellow Bird” on his guitar.

At the next year’s Administrator’s Banquet, Russ gathered a few Principal friends to join in the fun and perform with him. With a copy of the words to their songs and a quick rehearsal in the Men’s Room a few minutes before the performance, the “Singing Principals” was born.

After this humble beginning, two brave female principals joined the group in the early seventies and the Singing Principals continued to accept invitations to sing from professional and civic organizations. The enthusiasm displayed at each performance was contagious and other Principals “caught the fever”.

The first large audience that the Singing Principals performed for was at a Convention in Miami, Fla. for the National Association of Elementary School Principals. That performance resulted in a standing ovation of 6,000 convention attendees .

On May 22, 1999 at the Broward Center for the Per-forming Arts Amaturo Theater, the 40th year reunion concert was presented. All Principals who had ever been Singing Principals, were invited to attend the concert and came down the aisles of that facility to the stage to sing once more a song that was sung by the Singing Principals for the past 40 years.