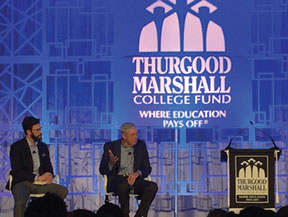 Koch spoke about the need to provide value in the lives of others as a business motivation and profit driver. He told the students that products that assist and improve the lives of others are typically profitable, a standard canon of business advice that has been conveyed by many business owners in the technology age. One student asked Koch how he felt when he made his first million dollars. Koch said that money was “not how I measure success,” and continued to repeat the themes found in his book “Good Profit,” which was given to every student attending the lunch.

Koch Industries has been ubiquitous at national conventions over the last two years. The Charles Koch Foundation hosted a session on justice reform featuring their general counsel Mark Holden at the annual National Urban League convention in Baltimore. They have also contributed to the United Negro College Fund (UNCF) and TMCF at a time when HBCUs have struggled during the last eight years for federal assistance. In 2014, Koch Industries and the Charles Koch Foundation donated $18.5 million for scholarships to UNCF.

The honorees for the TMCF gala were Jack Dorsey, CEO of Twitter and Square; Secretary of Agriculture Tom Vilsack; Shelley Broderick, Dean and Joseph Rauh, Jr. Chair of Social Justice at the University of the District of Columbia David A. Clarke School of Law and Benjamin F. Wilson, Managing Principal Beveridge & Diamond, P.C. Talk show host Wendy Williams was the emcee for the evening. After the awards were given out, a number of students at HBCUs took to the stage for various honors. Many donors and supporters of TMCF also attended the event.

Many education advocates were pushing the name TMCF President Johnny Taylor to be Secretary of Education under the Trump Administration, but on November 23, Betsy DeVos, a former chair of the Michigan Republican Party, was named for the job.

The theme of the Thurgood Marshall College Fund’s 28th Annual Awards Gala was “Developing Minds…Delivering Dreams,” and celebrated the achievements of the nation’s foremost visionaries who have used their status to positively impact HBCUs. In 2015, the gala attracted more than 1,500 attendees and raised over $4.8 million.

Rep. Maxine Waters Pushes Back Hard Against Unsubstantiated “News” From the Right

“Lies, lies, and more despicable lies. I am utterly disgusted by the spread of the completely false, absurd, and dangerous lies and conspiracy theories that are being peddled by ultra-right-wing pundits, outlets, and websites who are promoting a fraudulent claim that a member of my staff was responsible for the release of the personal information of Members of the United States Senate on Wikipedia […]