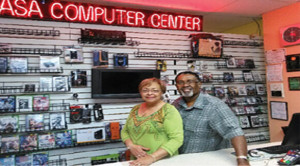 The end of an era: ASA Computers closing Feb. 29

After 25 years as the most solid resource for computers and as rare Black leaders in the technology sector, Rocky and Marilyn Davis will close their beloved ASA Computers store and migrate their business online. The youthful couple, happily married for 50 years (at least 25 of which they’ve also worked together) plan to spend more time relaxing and pursuing their personal interests.

The Davises’ legacy will live on into infinity based upon the caliber of work they’ve done and generations of young people they’ve trained. I still remember Rocky quoted in the Westside Gazette in the early 1990s: “Computers are just an appliance, like a washing machine. You don’t have to be intimidated by it.”

I asked Rocky and Marilyn how they’re feeling a week away from closing.

“I have mixed feelings,” said Rocky. “You’ve spent all these years to build something you’re proud of. You’re serving the community. Through the years we’ve trained numerous young black folk in technology. You worry about who’s going to do that in an unbiased way.”

“It’s almost like your baby,” said Marilyn. “You nurture it from the beginning, so it’s bittersweet.”

What has the experience been like? I asked.  “There wasn’t anybody to teach us,” Rocky laughs. “We learned it from the ground up. We took a different route. Many Black people that start businesses look for state, federal and local grants program to support them. There’s nothing wrong with that. But when the programs run out, so does the business. We put up our shingle and said this one thing is what we do – computers. We accumulated over 8,000 customers over 25 years.”

“When we were growing up, our parents told us to get a good education so we could get a good job. Part of that was right.  It’s important to get a good education, but find something you love to do. Because if you have to work for the rest of your life it better be something you enjoy. Fortunately, my wife loves book-keeping, loves numbers. Me? I’m a gadget freak, so I get to come in and play with all the toys. We haven’t ‘worked’ a day in 25 years.”

What would you say is your legacy?

“The best legacy is to see one of our original trainees and employees now running for the state legislature; another has a degree works for a company that does war simulation. At one time, many of the technicians hired by CompUSA had interned with us so they could validate their credentials. We came, we saw and we did all we could do.”

“They’ve been so wonderful, “offered Jeremy Lai-Fang, approaching the end of a three-month internship with ASA through Career Source. “I’m disappointed that they won’t be here for other young people, but I’ll never forget the lessons they taught me about computers and about life. They deserve it.”

So really, what are you going to do next, Rocky?

“Sleep late. Go to the beach a lot more. Read. Get up and exercise. Remember I’ve been working since I was 15, right out of high school, in a grocery store. Then into the military, then you have a family so I’ve been working more than 50 years straight. I think I’ll go back to playing piano.”

“I’m looking forward to more relaxation, not being so much in the rat race,” says Marilyn. “I plan to keep serving on the City of Lauderdale Lakes’ Economic Development Advisory Board. I’m secretary of our homeowners’ association and treasurer of my church, Harris Chapel United Methodist, so I’m not really retiring.”

While serving quietly and consistently as leaders in the Broward County community, the Davises have raised two sons and now have seven grandchildren and four great-grandchildren.

I hope you take the opportunity to go by and see Rocky and Marilyn one last time at 4031 N.W. 34 St. in Lauderdale Lakes, Fla. before Tuesday. Then the office closes and the Davises migrate to asaonsite.com.

Walking away from bad customer service

Walking away from bad customer service
[…]

No one had to die: Unchecked violence at the Hallandale Beach Police Department

After further consideration of all the qualified candidates for the Governor of Florida, the Westside Gazette Editorial Board(WEB) has reasoned to endorse Mayor Andrew Gillum.