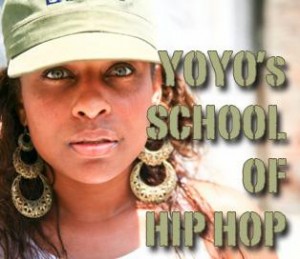 Sabrina Shellman has spent her whole life dreaming about becoming an actress. So when she heard Grammy-nominated rapper Yolanda (YoYo) Whitaker was bringing her School of Hip Hop to Highland Park, Shellman could not wait to attend.

“It’s in me and I want to bring it out and show the world,” Shellman said about acting. “YoYo taught me so much about acting and life so I know this is something I’m going to do.”

Whitaker, a rapper, actress and champion of female empowerment who came on the scene in the early 1990s with her hit song, “You Can’t Play with My YoYo,” created YoYo’s School of Hip Hop in her native Los Angeles two years ago.

The school began as a seven-week program for youths ages 7-17 that focused on teaching writing structure and hip-hop dance. The program has since expanded to include vocal performance, beat production and acting.

Last week, Whitaker brought her School of Hip Hop to Highland Park’s Detroit Rescue Mission, where more than 80 youths from across the area have been attending.

The free program, hosted by Highland Park Mayor DeAndre Windom and the Detroit Rescue Mission Ministries, will end with a showcase Friday night. Youths still can attend sessions at the rescue mission up until Friday.

Shellman, 19, of Detroit is two years older than the cutoff age, but Whitaker refused to turn anyone away.

YoYo’s School of Hip Hop begins with 15 minutes of motivational speaking from Whitaker, who teaches the participants about building character.

After the morning motivation, students participate in a hip-hop dance session. In the afternoon, students break off into groups where they are groomed in artist development. The program is held four hours a day.

Windom, who became mayor of Highland Park this year, wanted to bring YoYo’s School of Hip Hop to the city after seeing an opening of the program in Los Angeles.

“That program was such a success so we decided to continue it,” Whitaker said of the original program two years ago.

Since then, Whitaker has worked with several organizations around Los Angeles to present the program.

“I’m not just lending my name, but I’m passionate about this program,” said Whitaker, 41. “I expect the best out of them, and I’m teaching them the best ways to be young professionals.”

Whitaker also has brought in fellow artists like Detroit native Christian Mathis, who performs under the name Trick Trick, to speak to the children.

“This is a good thing for Highland Park, ” said volunteer Egloris Turner, whose five children attend. “The kids are having a ball, and they are focused.”

More Details: If you want to go

Ross was taken into custody Wednesday by a U.S. Marshals Service fugitive task force and sheriff’s deputies at the mansion in Fayette County, south of Atlanta. Ross, 39 — whose real name is William Roberts […]