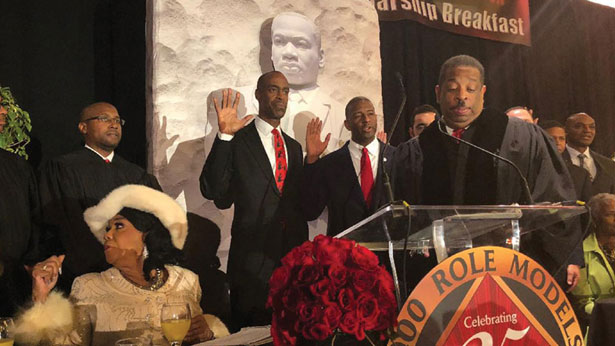 As we begin 2018, there is strong excitement in Black communities all across Florida and the United States in the wake of Senator Doug Jones’ historic win in Alabama.

Black voters have always made up the base of the Democratic Party, and in 2018 they’re ready to build on their progress from the past two years.

Black women were Secretary Hillary Clinton’s strongest voting bloc at 94 percent — and we fought passionately to ensure the values that matter most to us and our communities were heard. In Alabama, black voters voted for Doug Jones at 96 percent, and black women voted for Jones at 98 percent.

As we move forward, we know that OUR community’s votes will matter more so than ever in 2018  – and we must move forward as we always have. It matters more now than ever before.

In Florida, our community has the opportunity to make history — electing the first ever Black official to statewide office  — Tallahassee Mayor Andrew Gillum — as our next Governor.

Mayor Gillum is the fifth of seven children, born to Frances and Charles, in Miami. Andrew’s mother worked two jobs as a presser in a dry cleaning store and as a bus driver, and his father was a construction worker. The family later moved to Gainesville, and Andrew went on to be the first in his immediate family to attend college, graduating from Florida A&M University (FAMU) in Tallahassee.

During his time at FAMU, Andrew served as student body president and he led countless demonstrations and protests against then-Governor Jeb Bush. While still at FAMU, he ran for and won a seat on the Tallahassee City Commission, becoming the youngest person ever elected to it. In 2014, he was elected Mayor, and in 2017 he began his historic campaign for Governor. He lives in Tallahassee with his wife R. Jai, fellow Rattler alumnae, and their three children.

Andrew is championing many of the issues we care most about: lowering the costs of health care and expanding access to health insurance for everyday Floridians; defending our public schools by ensuring our tax dollars don’t go to unaccounted for privately managed charter schools, and paying our dedicated teachers what they’re worth; ensuring that every Floridian, especially those who have paid their debt to society, have the right to vote; and creating an economy where working people and families, not big corporations, are at its center. Andrew is touring the state and campaigning on his “Fair Share for Florida’s Future” plan — making the richest corporations pay a modest increase in their corporate income taxes in order to invest $1 billion in public school construction, teacher salaries, early childhood education and SHOP 2.0 vocational training.

He has recently visited a number of high-profile events, including Congresswoman Frederica Wilson’s 5000 Role Models Event, the Women’s March in Miami, and outreach events across Florida.

As our Governor, Andrew will be the leader we have been waiting for over these past two decades. In this election, we have the opportunity to make a history-altering decision for ourselves. The only way we can do this is by making our voices heard at the ballot box, so that we can push forward progress in our communities from the ground up, the way that we always have.

“Paid for by Andrew Gillum, Candidate for Governor”