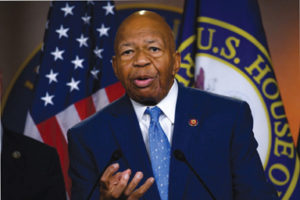 The Chairman of the House Committee on Oversight and Reform and a titan of the U.S. Congress, Representative Elijah Cummings (D-MD-7), died early Thursday morning. He was 68.

In recent years, Cummings had been in and out of the hospital. “Dr. Elijah Saunders and I took care of Congressman Cummings for [years] for his blood pressure,” said Cummings’ longtime nurse, Barbara “B.J.” Shaneman. 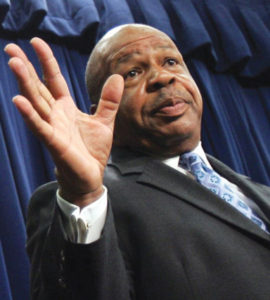 “He always called me the boss because he told his team I was a short woman with a big voice. I would fuss at him about watching his blood pressure. His health was my concern. I screamed when I heard the news. I said, ‘this can’t happen.’ I said they [Cummings and Saunders, who died in 2015] were the last of the old guard,” Shaneman said.

Recently, and in increasingly rare sightings of the congressman, Cummings was seen using a walker.

He underwent an undisclosed medical procedure, and his office expected that he would only miss about one week of work.

“He was an honorable man who proudly served his district and the nation with dignity, integrity, compassion and humility,” Mrs. Cummings said.

He earned his law degree from the University of Maryland School of Law.

The recipient of 13 honorary doctoral degrees, Cummings dedicated his life of service to uplifting and empowering the people he was sworn to represent, according to his biography.

He began his career in public service in the Maryland House of Delegates, where he served for 14 years, becoming the first African American in Maryland history to ascend to the position of Speaker Pro Tem.

Since 1996, Cummings has represented Maryland’s 7th Congressional District in the U.S. House of Representatives.

Cummings was committed to ensuring that the next generation has access to quality healthcare and education, clean air and water, and a strong economy defined by fiscal responsibility. Children “are the living messages that we send to a future we will never see,” he often said.

In addition to the contributions he made to improve the lives of all Americans, the congressman was a passionate advocate for his beloved Baltimore, where he was born and raised.

Earlier this year, President Donald Trump disparaged the city – particularly parts of Cummings’ district — labeling the city as a “rodent-infested mess where no human being would want to live.”

Cummings immediately responded: “Those in the highest levels of government must stop making hateful, incendiary comments that only serve to divide and distract the nation from its real problems, including mass shootings and white supremacy.”

“Those in the highest levels of the government must stop invoking fear, using racist language and encouraging reprehensible behavior,” Cummings added.

“He was a champion of the people, a soldier and a warrior for his city, the state, and the nation,” said Baltimore Times Publisher Joy Bramble. “Elijah Cummings made Baltimore and all of those who came across better.”

The congressman told a local reporter that he and Trump had just one face-to-face conversation since the president took office in 2016.

“I said, ‘Mr. President, you’re now 70-something, I’m 60-something. Very soon, you and I will be dancing with the angels. The thing that you and I need to do is figure out what we can do – what present can we bring to generations unborn?”

His last act in Congress came on Oct. 8, when he joined three others from a bipartisan group to introduce legislation called “The Family Asthma Act.” The bill seeks to expand federal, state, and local efforts to improve care for individuals with asthma.