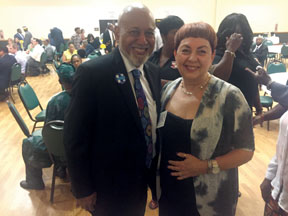 “It was never about the money or the power”: Abbe Rifkin

Being a public servant has become a way of life for Abbe Rifkin.  She says it goes back to her roots as the grandchild of immigrants who came to the United States during the mass influx of Eastern Europeans starting at the turn of the century.  Her grandparents urged their children and grand-children to give back to the country that welcomed them with open arms and allowed them to become Americans. This was not lost on her.

A New York transplant, Rifkin is a product of the public school system.  Her family moved to Miami Beach (which she jokingly calls the “sixth borough of New York City) where she attended both middle and high school. Immediately after high school she went on to the University of Florida, receiving a degree in Journalism in 1978.  Tragedy struck during her junior year when her beloved father, Jack, died suddenly after suffering a heart attack at a Miami Dolphin football game.

Deciding that the law was what she wanted to do, she re-turned to South Florida to attend law school at the University of Miami rather than going anywhere else in order to help her now-widowed mother and younger sister. Money was tight, so Rifkin worked two jobs to put herself through school. She says it was the silver lining in the dark cloud of her loss. “I learned the value of hard work and depending upon yourself to achieve your goals.  If you want to achieve something and you want it bad enough, you don’t complain—you go out and work for it.”

A work-study internship at Janet Reno’s office changed the course of her life—she knew what she wanted to do with her life.  Her passion and gusto for the job was not lost on Reno, and she offered Abbe a job in her third year of law school, where she’s been ever since.

“It was never about the money or the power,” Rifkin says.  “Every single day I get to do the right and just thing. It might not make everyone happy—any field where there are two sides someone is going to be unhappy with the result. But I’ve always got the law, compassion, and the truth on my side, and that always equals justice.”

Rifkin started her career at the State Attorney’s Office in the Juvenile Division, eventually being appointed Assistant Chief. “I really do think it’s the most important division in the court system.  If we can stop our youths from going down the path of crime before they get to be adults, we can make our community so much better,” she says.

After an extended stay there, she transferred to the Felony Division and the Sexual Battery Unit, where she tried complex felony cases, high profile murder cases, and sex crime cases involving child victims.  Eventually she became Deputy Chief of the Felony Division, Senior Trial Counsel, and head of the Sexually Violent Predator Unit, positions she holds to this day.

Along the way she married and started a family. She and her husband, Scott, moved to Broward County in 1982, believing it was the best place to live and raise a family.  Her two daughters, now grown, were born, raised, and educated in Broward She continued to work in Miami, but quickly grew to love her adopted community. She and her family became very involved in their religious institution, and through that and her associations in the legal community (she is president of the South Broward Bar Association and on the board of the Broward County Women Lawyers Association), she has been active in the community with such groups as the PACE Center for Girls, Habitat for Humanity, United Cerebral Palsy, and various cancer fighting organizations.

From the day she became a lawyer Rifkin’s goal was to become a judge.  But first she felt the need to perfect her craft, and distinguish herself as a lawyer, trying hundreds of complex cases, like the first “nobody” homicide case in Miami-Dade County (and the second!), the capital murder of 5-year-old Quatisha Maycock and the attempted murder of her mother, Shandelle, by career criminal Harrel Braddy (who is currently on death row), and most recently the murder case involving Janepsy Carballo which was featured on “Dateline” with Keith Morrison.  The Judicial Nominating Commission nominated Rifkin to the governor for eleven different judicial appointments, but she was passed over by Governor Scott each time.  So, she says, she decided to run and “take it to the people.”

In March Rifkin filed to run against embattled incumbent, Matthew Destry along with four others.  Rifkin was one of the top two highest vote getters and will face an opponent in the general election on November 8th.

Known in the office and in the community as a mentor, Rifkin joined the faculty at Florida International University College of Law at the invitation of famed civil rights and criminal defense attorney, H.T. Smith, who runs the law school’s trial advocacy program. Smith first met Rifkin when she was an intern at the State Attorney’s Office, and she volunteered to assist his client, charged with capital murder, as a “demonstrative aid” during his testimony. Smith never forgot it, and over the years the two became opposing counsel in many hard fought cases and good friends.  So, it was natural for Smith to ask Rifkin to join his team at FIU.   Smith says of Rifkin, “Abbe Rifkin is the most qualified candidate running for a judgeship in Broward County.  Her experience in the courtroom is unmatched. Her love for her community is unquestioned.  And her dedication to the cause of justice is unsurpassed. Abbe is the ‘real deal’—honest, smart, and hard working.  The people of Broward County would do well to elect her to serve them as a Circuit Court Judge.”

Criminal defense attorney Johnny McCray echoes attorney Smith’s sentiments.  “Abbe is the type of prosecutor who completely understands the job and her role, understands the law, understands the problems facing the community, and knows what is fair and just.  Not everyone does.  She has a reputation as a prosecutor with a fair heart and a keen mind.  I know that once she takes the bench as a judge she will rule with compassion and fairness and listen to all sides before making a decision.”

Rifkin knows she is taking on a tough job, but relishes the idea. “Broward County has had its fair share of judges who were less than stellar. The job of a judge is one of the toughest jobs in the world—you become the person who has to make that tough decision, the one that could mean life and death for someone, whether it’s civil or criminal. You need the person with the most experience in and out of the courtroom.  I’ve worked for 35 years to come to this place, and I’m ready to take on that responsibility. I hope the voters in this community will consider entrusting me with this very special role.”