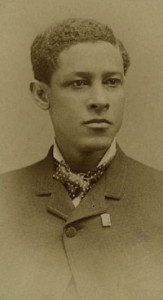 Jan Ernst Matzeliger  (Sept. 15, 1852 – Aug. 24, 1889) was a revolutionary in the shoe industry with the invention of the lasting machine. Matzeliger was born on a coffee plantation in Dutch Guiana, now Suriname. His father, Ernst Matzeliger, was a third generation Dutchman of German descent living in the Dutch Guiana capital city of Paramaribo. He owned and operated the Colonial Shipworks that had been in his family for three generations. His mother was a house slave of African descent; she lived on the plantation of which his father was the owner for a time. At the age of ten, Jan Matzeliger was apprenticed in the Colonial Ship Works in Paramaribo, where he demonstrated a natural aptitude for machinery and mechanics. He left Dutch Guiana at age 19, and worked as a mechanic on a Dutch East Indies merchant ship for several years before settling in Philadelphia, Pennsylvania, where he first learned the shoe trade. By 1877, he spoke adequate English (Dutch was his native tongue) and moved to Massachusetts to pursue his interest in the shoe industry.

After five years of work, Matzeliger obtained a patent for his invention in 1883. His machine could produce between 150 and 700 pairs of shoes a day, cutting shoe prices across the nation in half. He sacrificed his health working exhausting hours on his invention and not eating over long periods of time. He caught a cold which quickly developed into tuberculosis. His early death in Lynn, Massachusetts from tuberculosis meant he never saw the full profit of his invention. He died on August 24, 1889, three weeks shy of his 37th birthday.

Jan Ernst Matzeliger’s invention was perhaps “the most important invention for New England.” His invention was “the greatest forward step in the shoe industry,” according to the church bulletin of The First Church of Christ (the same church that took him in as a member) as part of a commemoration held in 1967 in his honor. Yet, because of the color of his skin, he was not mentioned in the history books until recently.

America is still a lie