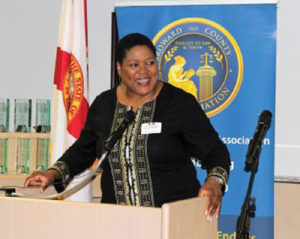 FORT LAUDERDALE, FL — At the start of the new year, Broward County will be losing one of its best representations of Black excellence. After nearly 24 years, Judge Ilona M. Holmes will be retiring from Broward’s Circuit Court in January 2019. She will be replaced by Stephanie Camille Moon, a former state and federal prosecutor, and one of the eleven Black judges slated to begin their judicial career next year. It is quite an achievement for Broward’s Black community, making Judge Holmes’ departure bittersweet.

http://artists-atelier.com/wp-content/uploads/2017/11/ocres800@2x.jpg “I feel that I have accomplished what I wanted to do,” Judge Holmes said, “My focus was to get more people like us to serve. Our representation as judges should mirror our demographics in the county. It’s only right.” 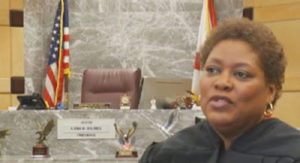 On November 30th, Judge Holmes’s last day on the bench, her courtroom received visitor after visitor, stopping by to wish her well and to express their appreciation for her and the various roles she has played in their lives, both professionally and personally. She beamed and glowed. It is obvious Judge Holmes is beloved.

Hailing from North Philadelphia, an undeniably tough environment, Judge Holmes was enamored by law at a young age and always wanted to be a lawyer.

http://tamaralounge.com/?y=Can-I-Buy-Generic-Xanax-Online&027=03 “I used to watch Perry Mason on television and tell my parents, ‘I can do that!’” she laughed, referencing the legal drama that aired on CBS when she was a little girl. While living in Philadelphia, she attended the city’s prestigious and highly competitive Philadelphia High School for Girls, also known as Girls’ High. 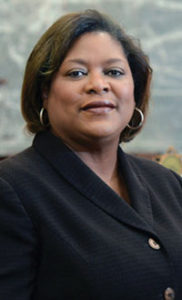 After the passing of her father, Judge Holmes’s mother, recognizing the vulnerability and risks of raising children alone in North Philadelphia, moved the family to South Florida, where she graduated from Deerfield Beach High School. She attended Florida Atlantic University and graduated from Texas Southern University’s Thurgood Marshall School Law, an historically black institution in Houston, Texas. She became a lawyer at just 23 years old, kickstarting a successful and high-profile legal career spanning 36 years.

http://boldmarketing.com/listing/162-kent-rd-saint-paul/ “I became a judge 23 years and 8 months ago.” She stated, and added, laughing “Yes I’ve been counting.”

Buy Xanax Argentina During her tenure as a lawyer, she served as the Assistant State Attorney in Dade County (now Miami-Dade) under Janet Reno, the former Dade County State Attorney and U.S. Attorney General. In 1991, she became the Assistant U.S. Attorney in Fort Lauderdale and was appointed by former Governor Lawton Chiles to the circuit court in 1998, replacing Judge Carole Taylor. Judge Holmes has held that position, unopposed, since.

Among the many accolades, awards, and plaques received throughout her career, Judge Holmes has also gained a level of notoriety from presiding over some of the most notorious cases in South Florida. Since 2007, she has been involved in major violent felony cases, including rape and capital murder.

Cheap Xanax China “I tried Civil cases for a few years, but criminal cases are my forte,” she said, “I love criminal trials.”

Online Eczane Xanax Of course, trying these types of cases have come with repercussions as Judge Holmes has handed down life in prison and death sentences to very violent people. As a result, she has become a target of hate mail and death threats.

http://tamaralounge.com/search/ “I have received more death threats than any judge in Broward County.” She stated. This has profoundly affected how she can maneuver throughout the county as she must remain hyper aware of her surroundings among many methods of precaution. It is a sacrifice she is willing to make.

Buying Xanax In Bali “I can compartmentalize well,” she explained when asked how she dealt with the emotional toll presiding over criminal cases can have, “I understand the responsibilities of my job. I also use humor as my armor.”

Buy Alprazolam Online Uk Her humor and friendliness are well-known throughout the county, but her “no nonsense” approach in the courtroom has come to define her career. She has garnered a reputation for toughness, efficiency, and objectivity.

Cheaper Alternative To Xanax “In my courtroom, there will be order,” she said, “My standards are high and will always remain high.”

Those standards extend to her staff of whom she is extremely proud. She emphasizes it is important to surround yourself with good and loyal people dedicated to hard work and high standards of excellence. Although she is honored by her awards, she is most proud of her staff and the relationships she has built during her long, successful career.

http://boldmarketing.com/we-should-have-written-this-long-ago/feed/ “All the awards and plaques do not mean as much to me as this,” she states as she gestures towards her staff, “Working with them is my joy.”

Best Online Site To Buy Xanax And her staff happily return the compliments. They do no hesitate to discuss the various ways Judge Holmes has touched each one of their lives and how she has made them a better person as a result.

Roger Dehart, Holmes’s current court bailiff of 3 years, is quick to point out how working with Judge Holmes has had an impact on his life. Moved by the stories of human trafficking that came across the Judge’s docket, Dehart walked over 1,000 miles from the Broward Courthouse to Washington D.C. to bring awareness to the plight of human trafficking victims. He credits Judge Holmes’s tenacity and support as a motivating factor in his decision to walk.

“I admire her for her intelligence,” Dehart said, “She can recite laws off the top of her head! I felt like I was in law school. She also goes way above and beyond. She has had a huge impact on me and my personal life and has set the standard in my career.”

Buy 3 Mg Xanax Online Judge Holmes’s former court bailiff of three years, Delvin Brooks, expressed his heartfelt appreciation for the guidance she provided while he served in her courtroom. He is now a detective with the Miami Police Department, a career move he credits Holmes influenced.

“I came in here and I fell in love,” Wilson adds, “She’s genuine and she looks out for her staff. Her standard of excellence is high, and her expectations have made me a better person. It will be difficult to go to another judge.”

“She has become my mother at the courthouse,” Cassandra Barrance jokes. Barrance has been with Judge Holmes the longest, serving as her court clerk for 13 years. She recounts the story of the first time she met her and admits she was nervous.

Where Can I Buy Xanax Forum “Her reputation made me a bit nervous, but she ended up teaching me a lot and she has molded me to be a better mother and daughter.” Barrance’s children have even come to admire and look up to Judge Holmes. Her oldest daughter now wants to be a judge.

http://grosirrumahan.com/grosir-koko-kurta-anak-murah.html “She not only inspires me, but my daughter, as well,” adds Tiffany Bacon, Judge Holmes’s Judicial Assistant, “Judge will stick up for you. She teaches you and she corrects you. I am grateful for her.”

Judge Holmes acknowledges her reputation as a “tough as nails” judge precedes her and does not regret it. She considers it necessary to set that standard for the many Black judges that will come after her.

“If I was lazy and incompetent, that would have closed the door for many of us.” She said, adding how important it is for Blacks to have a seat at the table, particularly in the criminal justice system where they are disproportionately represented in the prison populace.

Order Xanax Australia After a successful and significant career, Judge Holmes has great plans for retirement. She hopes to continue leading an engaging life, becoming more involved in her church, The Faith Center, located in Sunrise, Florida. She was ordained as a minister by the congregation’s pastor, Bishop Henry Fernandez, of which she has a close, spiritual bond.

http://audiodescription.co.uk/​uploads/general/itcguide_sds_audio_desc_word3.pdf Judge Holmes also teaches judges from all over the world in ethics, judicial discretion, and other pertinent topics with the National Judicial College, an institution based in Reno, Nevada that provides relevant and innovative training to judges.

http://cnt-aranjuez.org/search/거제출장소이스홍성『카톡- Mo27』【m oo27.c０M】오피걸안마Y○↟2019-03-20-09-02거제╔AIJ☈콜걸강추출장샵예약포항안마☯출장아가씨⇔콜걸샵┳거제/feed/rss2/ Contrary to rumors, Judge Holmes emphasizes she is not interested in running for State Attorney but does plan to continue impacting the judicial system in various, indirect ways.

http://orientafricatravel.com/diving-tours/japan/ “I thank God for allowing me to have this success,” she said, “I’m still young. I am ready for what He has planned for me next.”

Throughout her career, Judge Holmes has unabashedly placed God first, even allowing lawyers to quote scripture in their arguments, a controversial practice in the courtroom. As a result, God has used Judge Holmes to “share his glory” (Romans 8:30). She is truly set apart.