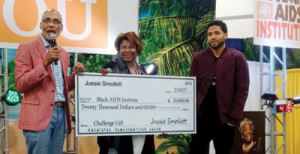 When you ask Jussie Smollett—one of the breakthrough stars from Fox’s uber-successful TV show Empire—how he wants to be introduced, he always leads with the word activist.

For many actors in Hollywood, that’s just a public-relations gimmick; not Smollett. In a recent interview, he shared how his mother would admonish him and his siblings as children, “There are two things you must do: Love one another and be an activist.” Note that being an actor did not make her list.

With his mother’s voice and a sense of the type of real activism that generates change imprinted on his psyche, Jussie is not satisfied just using his voice and celebrity to draw attention to the HIV/AIDS epidemic. He recently leveraged his $20,000 gif to raise $40,000 for the Black AIDS Institute.

Smollett and his five siblings, especially his younger sister actor Jurnee Smollett-Bell, took heed. Jussie and Jurnee have been HIV/AIDS activists since they were 15 and 12 years old, respectively. Both also have been inducted into the Black AIDS Institute’s “Heroes in the Struggle” Hall of Fame for their heroic contributions in the fight against HIV/AIDS. Today, Jussie currently serves on the Institute’s board of directors and Jurnee is an HIV/AIDS ambassador.

“Jussie talks the talk, walks the walk and puts his money where his mouth and heart are,” says Phill Wilson, the Institute’s president and CEO. “We have many celebrities who support our work, and I am eternally grateful for their voices and time. But money fuels change. It takes dollars to test people for HIV; it takes donations to link people to care; it takes resources to resist the draconian and devastating attacks Donald Trump and his administration are waging on the HIV/AIDS community. If the President and the Republican-led Congress have their way, we are going to lose any opportunity to end the AIDS epidemic. Jussie understands that.”

Individual gifts demonstrate not only the power of philanthropy but also the impact that individual donations can have no matter their size. When faced with the Institute’s recent budget shortfall, Jussie immediately stepped up.

Realizing the importance of engaging others, he had the foresight to make his $20,000 donation a challenge gift, where a donor makes a contribution contingent upon other donors also contributing.

“So, in the end, we turned Jussie’s $20,000 contribution into $40,000. Those donations not only helped close our budget gap. They also helped us launch a testing campaign where we developed a monthly support group for 30 to 40 men,” says Wilson.

Smollett’s next project for the Black AIDS Institute is chairing the 2017 Heroes in the Struggle Gala in September. “As a member of the Black AIDS Institute’s Board and past Heroes in the Struggle honoree, I’m so excited about this year’s event. I can tell you, this year’s awards presentation is going to be a huge departure from our past shows. Number one: All of the 2017 inductees are going to be women. I know from my personal experience, women have been so important to this fight. While I’m not going to give away all of our secrets, I can tell you one of this year’s honorees will be none other than my TV mom, Taraji P. Henson. The Gala promises to be one of the events of the year. The other “sheroes” are equally beautiful, talented and fierce as Cookie Lyon.”

Jussie can be seen on the big screen in Alien Covenant, the latest installment of the Alien franchise. And of course, you can catch up on the life of Jamal Lyon when Empire returns to Fox for its fourth season, premiering on Wednesday, September 27, at 8 p.m. Eastern/7 p.m. Central.

For more information, or to learn how you can volunteer or donate to the Black AIDS Institute, go to www.BlackAIDS.org, email assistant@blackaids.org, or call (213) 353-3610 ext. 105.

Founded in May of 1999, the Black AIDS Institute (BAI) is the only national HIV/AIDS think tank in the United States focused exclusively on Black people. BAI’s Mission is to end the AIDS pandemic in Black communities by engaging and mobilizing institutions, leaders, and individuals in efforts to confront HIV/AIDS. BAI, disseminates information, conducts trainings, offers technical assistance and capacity building, interprets and influences public and private sector HIV/AIDS policies, delivers prevention and linkage to care services, and provides advocacy mobilization from a uniquely and unapologetically Black point of view.

Our motto is: “Our People, Our Problem, Our Solution.”

The world is a business, gullible voter

The world is a business, gullible voter