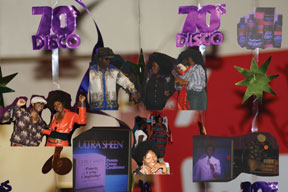 LA Lee’s 70’s Disco Party — 70’s Disco Night Foxxy Brown- You can have fun without liquor or violence…they did One Saturday  became one of the funkiest, grooviest most dyno-mite nights ever at L.A. Lee YMCA!!! Members, guests of members and staff came out to have a good time at L.A. Lee’s 70’s Disco Party. The evening was filled with fun, laughter and dancing as they got nostalgic and all gussied up in their 70’s garb. The activities that took place were the Dancing Machine contest (to see who could do the Robot the best, Soul Train line and even a live performance by L.A. Lee’s very own Program Director, Jandra Alexander!! Members left that evening feeling  celebrated for just being a part of the YMCA and were asking “when is the next one;” and the answer given was, “Soon, very soon”.