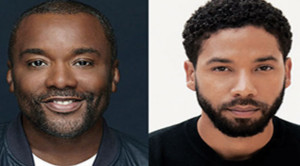 Filmmaker Lee Daniels (l) will be honored and Jussie Smollett will host the 2016 Heroes in the Struggle Gala Reception and Awards Reception. (Black AIDS Institute)

The Black AIDS Institute is honored to announce that award winning producer, writer and director Lee Daniels (Empire, Lee Daniels’ The Butler, Precious, Monster’s Ball) will headline an illustrious list of inductees into the Heroes in the Struggle Hall of Fame at a star-studded Gala Reception and Award Presentation, hosted by Jussie Smollett (Empire), at the Director’s Guild of America, in Los Angeles, on World AIDS Day, December 1, 2016.

Former Director of the Office of National AIDS Policy, Douglas M. Brooks; Director of External Affairs for ViiV Healthcare, Marc Meachem; Executive Director of SisterLove, Inc., Dazon-Diallo; and Los Angeles County Board of Supervisors, Mark Ridley-Thomas will be honored as well. The 2016 corporate Hero is Gilead Sciences. Each has played a leadership role in HIV in 2016.

Heroes in the Struggle Hall of Fame

Heroes in the Struggle is a photographic tribute to Black Americans and allies who have made heroic contributions to the fight against HIV/AIDS. Over 75 individuals from all walks of life—celebrities, doctors, policy makers, advocates, caregivers, and people living with HIV/AIDS—have been inducted into the exhibit since its inception in 2000. Since its debut, the Heroes in the Struggle exhibit has traveled the world, raising awareness, challenging individuals and institutions to get involved in their communities, and generating critical conversations about HIV stigma, testing, prevention, treatment and care.

About 2016 Heroes in the Struggle Gala Reception and Awards Presentation

Every year, the Institute inducts new individuals into the Heroes in the Struggle hall of fame at a Gala Reception and awards presentation. This year’s event will be held on Thursday, Dec. 1, 2016 (World AIDS Day) at the Directors Guild of America (DGA). The evening will begin at 6 p.m. with a VIP reception in the Atrium of the DGA from 6 to 7:30 p.m., followed promptly with the a-wards presentation in theatre One.

The Gala has been completely underwritten by corporate sponsors. Every dollar raised from ticket sales goes directly to Institute programs—which range from raising HIV/AIDS awareness; to training communities in the science and treatment of HIV; increasing HIV testing; helping to link and retain people living with HIV/AIDS or at risk for infection into care and treatment; and mobilizing leaders, institutions and individuals in efforts to end the HIV/AIDS epidemic.

Black AIDS Institute releases 12th Annual State of AIDS in Black America Report: ‘Black Lives Matter—What’s PrEP got to do with it?’

Today the Black AIDS Institute, in partnership with Gilead Sciences, is releasing its 2016 report on the State of AIDS in Black America: “Black Lives Matter: What’s PrEP Got to Do With It?” The report focuses on what Black communities need to know about pre-exposure prophylaxis (PrEP) and other new biomedical HIV prevention tools. […]

Are you Black and have something to say about health insurance? If so, the Black AIDS Institute wants to speak to you. […]

One in a weekly series about the Black AIDS Institute’s Greater Than AIDS ambassadors, who are using their VIP status in Black America to increase awareness of HIV/AIDS […]