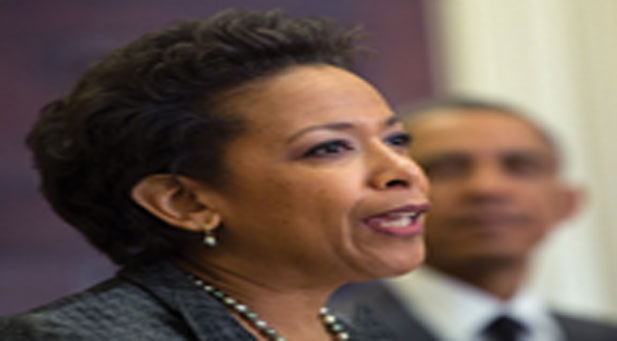 WASHINGTON, D.C. (NNPA) – In what may be the first test of the GOP-controlled, United States Senate’s willingness to work with the White House, President Barack Obama nominated United States Attorney Loretta Lynch to succeed Eric Holder as the next attorney general.

If confirmed, Lynch would become the first Black woman to serve as Attorney General.

During a ceremony in the Roosevelt Room at the White House, President Obama said that he couldn’t be prouder of Attorney General Eric Holder and that “our nation is safer and freer, and more Americans – regardless of race or religion, or gender or creed, or sexual orientation or disability -– receive fair and equal treatment under the law.”

Praising his new nominee, President Obama continued: “It’s pretty hard to be more qualified for this job than Loretta. Throughout her 30-year career, she has distinguished herself as tough, as fair, an independent lawyer who has twice headed one of the most prominent U.S. Attorney’s offices in the country.

She has spent years in the trenches as a prosecutor, aggressively fighting terrorism, financial fraud, cybercrime, all while vigorously defending civil rights.”

Lynch earned degrees from Harvard University and Harvard Law School and served as a United States Attorney of New York under President Bill Clinton a position she returned to during the Obama Administration.

“She has boldly gone after public corruption, bringing charges against public officials in both parties,” said President Obama. “She’s helped secure billions in settlements from some of the world’s biggest banks accused of fraud, and jailed some of New York’s most violent and notorious mobsters and gang members.”

President Obama said that one of Lynch’s proudest achievements was the civil rights prosecution of the New York City police officers involved in the brutal assault of the Haitian immigrant Abner Louima.

After police busted up a fight outside of a nightclub and arrested Louima, Justin Volpe, a white police officer, sodomized the Haitian immigrant with a broomstick in a New York City police precinct.

Volpe pled guilty to a number of charges associated with the 1997 attack and is currently serving 30 years. The city awarded Louima nearly $9 mill-ion in a settlement. Lynch was credited for working behind the scenes and navigating the city’s prosecution of the racially charged case.

In 2013, Holder asked Lynch to chair the Attorney General’s Advisory Committee and recognized Lynch and her staff for being instrumental in implementing the Justice Department’s “Smart on Crime” initiative.

“Throughout her career, and especially during her tenure as United States Attorney for the Eastern District of New York – during both the Clinton and Obama Administrations – Loretta has earned the trust and respect of Justice Department employees at every level, in Washington and throughout the country,” said Holder.  “She is held in high regard by criminal justice, law enforcement, and civil rights leaders of all stripes. And from her time as a career attorney, prosecuting high-profile public corruption cases, to her leadership of sensitive financial fraud and national security investigations, she has proven her un-wavering fidelity to the law – and her steadfast dedication to protecting the American people.”

Al Sharpton, president of the National Action Network, a civil rights group that advocates for social, economic and political equality, applauded the nomination of Lynch to be the next Attorney General.

“She is an excellent and worthy choice to succeed Attorney General Eric Holder in his groundbreaking work for the American people,” said Sharp-ton. “Though we have not al-ways agreed on cases, I have always seen her operate in the most fair, balanced, and just manner. Americans would be served greatly by her becoming our next Attorney General and the President should be given kudos for such a nomination.”

In a written statement on Lynch’s nomination, Wade Henderson, president and CEO of The Leadership Conference on Civil and Human Rights, a coalition of more than 200 civil and human rights groups, said that Lynch would bring stability to Department of Justice.

“Lynch would bring a steady hand to guide the Department of Justice and would make history as the first African American woman to serve as Attorney General,” said Henderson. “Having already unanimously confirmed Lynch twice as U.S. Attorney, we urge the Senate to approach its third confirmation process with integrity and expedience in the lame duck session.”

But Republicans have already signaled that they don’t have any plans to take up the nomination until the new Congress in 2015, leaving some Washington watchers to speculate about what President Obama will have to give up to get Lynch confirmed by the majority-Republican Senate.

Earlier this year, the president made a deal with Senate Republicans to fill vacant seats on federal judicial benches in Middle District and Northern District of Georgia.

The compromise also drew the ire of prominent Congressional Black Caucus members and civil rights leaders, because of two other nominees: Michael Boggs and Mark Cohen.

Rep. David Scott (D-Ga.) criticized Cohen, because he led the team defending the state’s laws requiring photo identification to vote. Rep. John Lewis (D-Ga.) spoke out against Boggs for voting against removing the Confederate battle emblem from Georgia’s state flag when he served as a state legislator.

The Democratic-controlled Senate Majority Leader Harry Reid (D-Nev.) also failed to bring President Obama’s nomination for U.S. Surgeon General Vivek Murthy up for a vote, because it was reported that Reid wasn’t confident that he had enough votes to get him through.

Republican lawmakers and the National Rifle Association attacked Murthy over one of his 2012 tweets that said: “Tired of politicians playing politics w/ guns, putting lives at risk b/c/ they’re scared of the NRA. Guns are a health care issue.”

The problems that President Obama had getting qualified candidates confirmed to key positions with a Democratic-controlled Senate may foreshadow greater challenges now that the GOP controls both houses of Congress. Still, some lawmakers remain optimistic.

In a statement on Lynch’s nomination, Congressional Black Caucus (CBC) Chair Marcia L. Fudge (D-Ohio) said that President Obama showed that he is uncompromising and determined that our country’s top attorney be dedicated to doing what is right for the American people.

Fudge said, “I commend President Obama for this selection, and request the confirmation of Ms. Lynch without delay.”

One week before iconic comedian Bill Cosby faces sentencing in his assault case and just a week after defense attorneys filed a motion asking for Judge Steven T. O’Neill to recuse himself, Camille Cosby arrived in Harrisburg, Pa., seeking relief. […]

The National Newspaper Publishers Association (NNPA) is pleased to announce it has received a $1.5 million grant from the Bill & Melinda Gates foundation […]