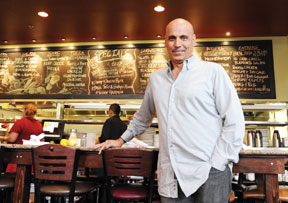 Andy Shallal, a first-generation Iraqi-American and the owner of Busboys and Poets, said that, as an immigrant, he had to speak up for immigrant rights in the current political climate in the U.S. “Staying on the sidelines in these times is no longer an option,” said Shallal. (Freddie Allen/AMG/NNPA). This photo was taken during an immigrant rights march for amnesty in downtown Los Angeles, California on May Day in 2006.

Immigration and labor experts say that mass deportation would cost the federal government nearly $900 billion in lost revenue over 10 years and would immediately reduce the nation’s gross domestic product (GDP) by 1.4 percent.

That GDP shortfall would grow by 2.6 percent, and reduce the cumulative GDP over 10 years by $4.7 trillion. Overall, the U.S. economy would lose $434.4 billion in GDP every year in losses in the construction, manufacturing, and leisure and hospitality industries, if unauthorized immigrants were forced to leave the country.

“This would cripple the economy,” said Rita Medina, the immigrant campaign manager for the Center for American Progress Action Fund (CPAF). Medina said that a state law in Alabama forced agricultural workers to leave their jobs, which had a negative effect on crop yields and the economy. “It takes a toll on communities. People are moving, because of the fear of [Immigration Customs Enforcement] and taking their children out of school. Small businesses and the housing market will be deeply affected.”

Medina said that the updated 287(g) program in President Trump’s memo on undocumented immigration, which deputizes state and local law enforcement officers to act as ICE agents, is basically like the original program on steroids.

“With some of the policies, you can’t say are they’re unconstitutional, because they’ve been in place for a while,” Medina explained. “I’m sure there are those in legal circles who are looking at options and ways to counter administration policy.”

According to the National Restaurant Association and Restaurants Opportunities Centers United, estimated one in four restaurant workers is foreign-born. Immigrants comprise a significant majority of farm workers and many of them are undocumented.

During protests over President Donald Trump’s immigration policies, hundreds of immigrants and their families marched to the White House, instead of going to work, shut-ting down more than 100 area restaurants in the Washington, D.C. metro area, to show what a day without immigrants in the workforce would look like. Demonstrations took place in cities around the country. In the district, protestors sought assurances from city officials that they would refuse requests from ICE to arrest and hold undocumented immigrants, demanded a halt to unchecked police violence committed against immigrants and asked for a fund to pay for a sanctuary program in the district.

For Andy Shallal, owner of Busboys and Poets, standing in solidarity with the protesters was a no-brainer. He closed his six locations, gave his employees a paid day off and also gave them the option of coming into the restaurants to partake in other activities on that day.

“As an immigrant myself, I have to speak up,” he said. “Staying on the sidelines in these times is no longer an option. We need true immigration reform that considers the human aspect of immigration— not just building walls, hiring agents, and expanding prisons.”

Shallal, a first-generation Iraqi-American who is married to an Iranian immigrant, said that his restaurants serve about 4,000 to 5,000 people every day.

“We’re sending a clear message that to hurt one is to hurt all. I stand with my customers, employees and immigrants,” said Shallal. “All of us come from different parts. It’s not possible to lose this. There are always people seeking sanctuary, refugees fleeing war and conflict. If you build a 20-foot wall, they’ll find a 21-foot ladder.

Shallal’s restaurants are sanctuaries and bastions of progressive thought and politics in the Washington, D.C., metro area. Shallal, who once hosted former President Barack Obama, said that the Trump Ad-ministration’s rhetoric has produced a hostile and dangerous environment.

“All of us have concerns about going home because of the heated rhetoric, even those who didn’t think about it. My wife is nervous about going home to see her family during the Iranian New Year. It still feels like we’re outsiders,” said Shallal. “I don’t know what’s going to happen with the administration. The new executive order makes this much harder. It’s very xenophobic and it’s offensive.”

Veteran trade unionist Dwight Kirk agreed with Shallal, echoing his friend’s position that people of good conscience were being compelled to stand up to the forces of regression and oppression seeking to roll-back more than half a century of social, political and economic gains.

“It’s very, very inspiring to see what’s happening. The struggle over immigration flows out of the ‘Fight for $15’ movement, where immigrants and other workers are employed and being underpaid,” Kirk explained. “These struggles have been generated over the past two years and flow naturally into immigrant rights. Around the country, labor unions are supporting these efforts.”

Kirk said that the detention and deportation of undocumented immigrants would “definitely be a hit to people’s pockets and lower-income people would pay more for products.

Who can we turn to politically? […]